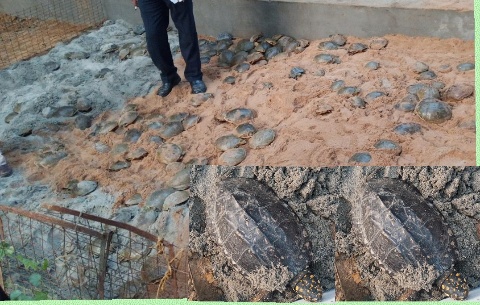 Etawah : Special Task Forces, UP today nabbed 4 accused red handed who were involved in smuggling of tortoises in Etawah district and selling into international market. Such kind of act is banned under the provisions of law, and is punishable. Infact such tortoises are a protected under wild animal act and hence prohibited species.

Special Task Forces, UP SSP Abhishek Singh had certain inputs about some of the Smugglers are involved in smuggling restricted tortoise which is illegally being sold in international market.

As per direction of Abhishek Singh, SSP, STF laid a trap where 4 accused namely Ramsharan, Kishan Gopal, Khoken and Rakshpal were red handed caught carriying and smuggling banned tortoises and were arrested alognwith 1 vehicle which was also seized carriying this prohibited species of tortoises.

There were a total numbers of 327 tortoises which were found there in the vehicle and recovered from a Vehicle. The said consignment of tortoise was to be handed over some one in the city and thereafter it was to be delivered to another places for salleing in international market illegally.

According to Abhishek Singh SSP STF,
“This is an International racket of Smugglers of girls and animals which smuggles endangered tortoise caught from Chambal region and further it is being sent to South Eastern Countries like Hong Kong, Singapore etc throgh Bangladesh. It’s huge gang operating in the region right from Chambal to Etawah to Bangladesh and further to nearby South Eastern region to cater demand of such wild and protected birds and animals. Earlier also we had caught a gang near Bangladesh border and had recovered 2000 numbers of endangered species. The STF has lodged a complaint before concerned Range Forest Officer under Wildlife Protection Act 1972 and all recovered tortoises shall be handed over to forest department to send their natural habitat. It is revealed that as these species are protected one under Wildlife Act under the act these species has been declared endangered. The price of seized tortoises is in crores in International market.”