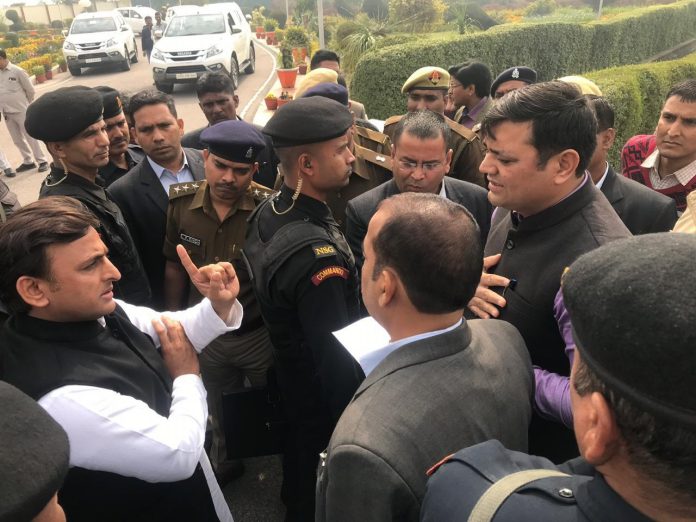 Lucknow/Prayagraj: Samajwadi Party’s National President, Akhilesh Yadav was today stopped by the district administration Lucknow at Amausi airport. It is being told that he along with some other SP leaders were about to go to Prayagraj to join the student union program at Allahabad University. Further the local administration has not described the reason to stop Ex. Chief Minister to proceed for Prayagraj.

Although, Akhilesh Yadav was stopped, and has alleged the role of CM Yogi in stopping him to proceed Prayagraj.

He openly told media persons that Yogi Adityanath is responsible for preventing him to move Prayagraj after he was being stopped at Lucknow’s Amausi Airport. Akhilesh Yadav further alleged and said that the present state government is scared of him that’swhy he was forced to stopped at Lucknow.

It is being said that Akhilesh Yadav was about to go to Prayagraj to attend the swearing-in ceremony of newly constituted student union at Allahabad University. But he along with other leaders were stopped at the Lucknow Airport.
So SP leader and his supporters became offensive started pelting stone.
Following the local police stern into action against the miscreants.
Meanwhile, SP MP Dharmendra Yadav was injured in Badaun district of Uttar Pradesh. Many policemen have also been injured in the action.

Today two governments have failed to fulfill their promises. On one hand this government says that in democracy everyone has the right to speak their own words. But today when necessary about to talk
against this present government, his mouth has been shut.

Reaction was seen in different -2 district’s of Uttar Pradesh when Akhilesh Yadav was stopped to reach at Allahabad University programme.