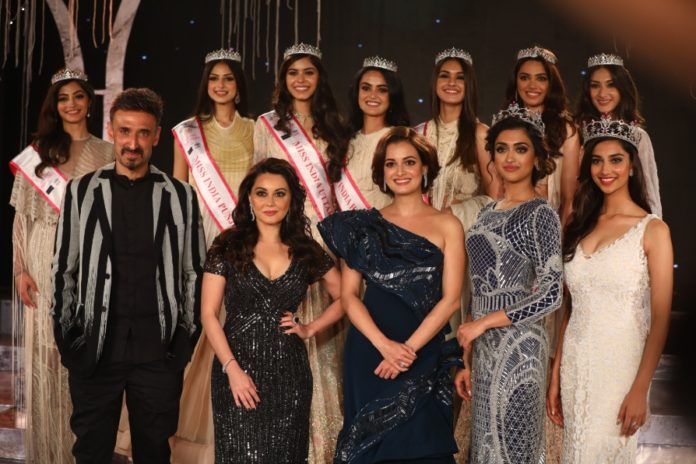 Delhi: With the legacy of transforming lives of young talented women who have become icons in the glamour and fashion industry, fbbColorsFemina Miss India 2019 co-powered by Sephora &Rajnigandha Pearls vows to continue its tradition with an aim to extend whole-hearted support to the new generation women who have the potential to lead and represent the country in the future.

With Six Miss Worlds who have made India proud by marking their presence on the global map- ReitaFaria (1966), Aishwarya Rai Bachchan (1994), Diana Hayden (1997), YuktaMookhey (1999), Priyanka Chopra (2000) and more recently ManushiChhillar Miss World (2017), who brought the coveted crown back home after 17 years – the hunt for the new crown bearer has now begun.

fbbColorsFemina Miss India North 2019 wrapped up with charm on 05th March 2019 at The Orana Conventions, Gurgaon which played a perfect venue partner besidesRoseate hotels and Resortsthat played a perfect host as the hospitality partner.

North Zone Mentor Dia Mirza who was one of the judges, was extremely happy that the deserving candidate will be representing their state at the grand finale. She enthusiastically quoted, “As a mentor to North and South Zone for Miss India 2019, I will be looking out for individuality! Women who care, who know their hearts, minds and are seeking to widen their horizons.”

The Judges for the evening were:

 Dia Mirza- Mirza has primarily worked in Bollywood and is known in the media for her social work. She made her acting debut with Rehna Hai TereDil Mein (2001).Dia Mirza was the second runner-up at Femina Miss India 2000 and was subsequently sent to Miss Asia Pacific 2000, where she won. She also won Miss Beautiful Smile, Miss Avon and Miss Close-Up Smile in Miss India. When she won the Miss Asia Pacific title on 3 December 2000 in Manila, the Philippines, she became the first Indian since Tara Anne Fonseca to win this title in 27 years. She completed the hat-trick of India winning international pageants in the year 2000. She’s also mentor to North and South Zone girls.

 Rahul Dev- Rahul Dev (born 27 September 1968) is an Indian film actor and former model. He predominantly works in Hindi, Bengali, Kannada, Malayalam, Odia, Punjabi, Tamil and Telugu films .He made his debut in the 2000 film Champion where he played a villainous role for which he was nominated for the 2001 Filmfare Best Villain Award. He also appeared as a villain in the Punjabi movie Dharti in 2011. In 2013, Dev made his television debut playing the role of demon Arunasur in the mythological TV series Devon Ke Dev…Mahadev

 MinisshaLamba –MinisshaLamba is an Indian actress who appeared in Hindi
films from 2005 to 2014. MinishaLamba was born in a Sikh family and She studied at
ChettinadVidyashram School, Chennai for a year and then shifted to Army Public School, Srinagar where she completed her schooling. She majored in English (Hons.) from Miranda House, University of Delhi.She made her debut with Yahaan (2005). Her other notable films include Honeymoon Travels Pvt. Ltd. (2007), Bachna Ae Haseeno (2008), Well Done Abba (2009), and Bheja Fry 2 (2011).[3] In 2014 she participated in Colors TV’s Bigg Boss 8.

 Meenakshi Chaudhary – An Indian model and beauty pageant titleholder. She is
pursuing her graduation in Dental Surgery and is a state level swimmer and Badminton player. She represented the state of Haryana at the Femina Miss India 2018 pageant, where she was crowned as Miss Grand India. Chaudhary represented India at the Miss Grand International 2018 beauty pageant held in Yangon, Myanmar and was crowned as 1st runner up, becoming India’s highest placer in this pageant.

 Gayatri Bhardwaj: fbb Colors Femina Miss India United Continents 2018 who hails from New Delhi, the capital city of India. She is a dentist by profession and is a National level football player and a trained classical dancer. She recently featured in a music video Call by DSoldierz by Times Music

The girls had to go through 2 rigorous rounds which included: –

fbb Collection – fbb presented the Ateesa summer collection. From smart casuals to Bohemian silhouettes, playful prints to stylish workwear this indo-fusion range is a perfect collaboration of freedom, fun and fashion. The collection is teamed with exquisite Ceriz hand bags.

Abhishek Sharma Vana collection – represented the fleeting shadows, supple vies dangling from branches,connecting bunches of foliage, life seeping through them, flowing like nectar in the body of the living,mystical being of the forest as random sounds of fluttering leaves and chirping of birds emerge fromthe dense, silent canopies. In the Vana, the theatre of the unsaid and the undefined, elements take asombre form, appear ephemerally and vanish again. It is a world alive and entwined, where lines and shadows mingle, shapes dissolve and tones coalesce, it is never fully revealed and never totally still. In it, all that can be seen and
expressed is not the whole, it holds in its womb a secret, the story of life and it’s fruition. Vana, the mystic being of the forest, an unbridled existence, a flowering of life.

The evening was hosted by Indian host, singer and film actress, Sophie Choudry who has been active primarily in Indian films and is also a former MTV India VJ and a model and television presenter.

Indian singer, actor and former cricketer Harrdy Sandhu, kept the audience engaged with his music His first song was Tequilla Shot but he got popular with Soch (2013) and Joker (2014), which were written by famous lyricist Jaani and made his acting debut in Yaaran Da Katchup (2014).

Besides, the magnificent entertainment act and volatile exclusive thought by the very best dance troupe within Delhi, Zenith Dance Troupe showcased high-energy and advanced acrobat acts merging bold knowledge, one of a kind choreography having effects to present the ultimate entertainment.

The finalists of fbbColorsFemina Miss India 2019 will undergo rigorous training and grooming sessions from the best experts in the industry before the Grand Finale on 15th June 2019 at NSCI Dome, which will be aired on Colors. With a dynamic and holistic approach towards coaching all the finalists, apart from the fame & glory the winners stand to chance to win prize in cash & kind to a crore and above.

fbb – Carrying forward the legacy, fbb – India’s Fashion Hub has come together with Miss India Organization to look for India’s next pride. The pageant is co-powered by Sephora &Rajnigandha Pearls.

The pageant was streamed LIVE on MX Player, our Live Streaming Partner

Watch the finale telecast of fbbColorsFemina Miss India 2019 on Sunday, 30th June at 1pm and 5pm on Colors& at 5pm on MTV