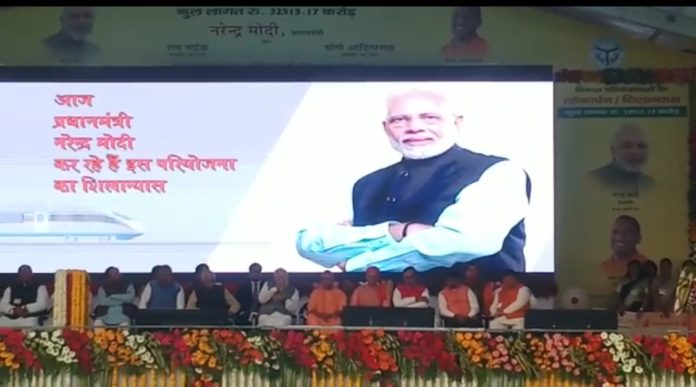 Ghazianad : PM Modi today also laid down foundation stone for Regional Rapid Transit System which will cover from Delhi to Meerut via Ghaziabad. This Rapid Rail will run at a speed of 180 km per hour and will cover almost 75 km in almost 40 to 45 minutes at a cost of Rs 30 ,000 crores. This will be one kind of such transport system India whose track will be partly underground and partly elevated form.
In his inaugural speech PM Modi describes Regional Rapid Transport System as next generation urban infrastructure and a state if the art in modern transport system, first time in India.

During foundation laying ceremony of RRTS PM Modi spoken, “we want to make people life better and easy. The urban infrastructure will serve our citizen in better way and their lives are likely to be easy going once this Raipid Rail is inaugurated. He informed our government is trying hard to make life’s of people is made easy and a better quality of life. He reiterated the vision of his government ‘support of everyone and development of every one’s. Today we have inaugurated Ghaziabad Metro and tomorrow it will be turn of Noida with a new Metro line. Yesterday, we have also Inaugurated Nagpur Metro line. In the same week Ahmedabad has also seen Metro first time functional.”

Modi further added, “our development projects are ru ni g on 2 paths. One is of development of infrastructure and second one is direct help to the needy people. First time we have started thinking of marginised people who were hitherto neglected and we’re untouched of government benefits after our govern.ent various policy were made to extend them government ‘support in many ways right from power to gas, employment to banking services, health, education and of course the most important housing for all. It is our target go given everyone a house by 2024.Modi Also Criticised Opposition For asking Proof of Surgical Strike On Pakistan