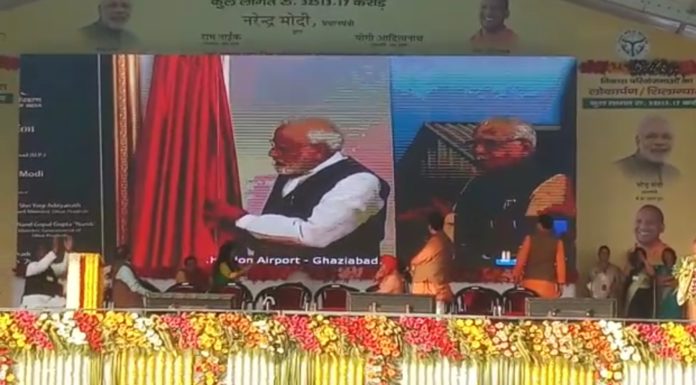 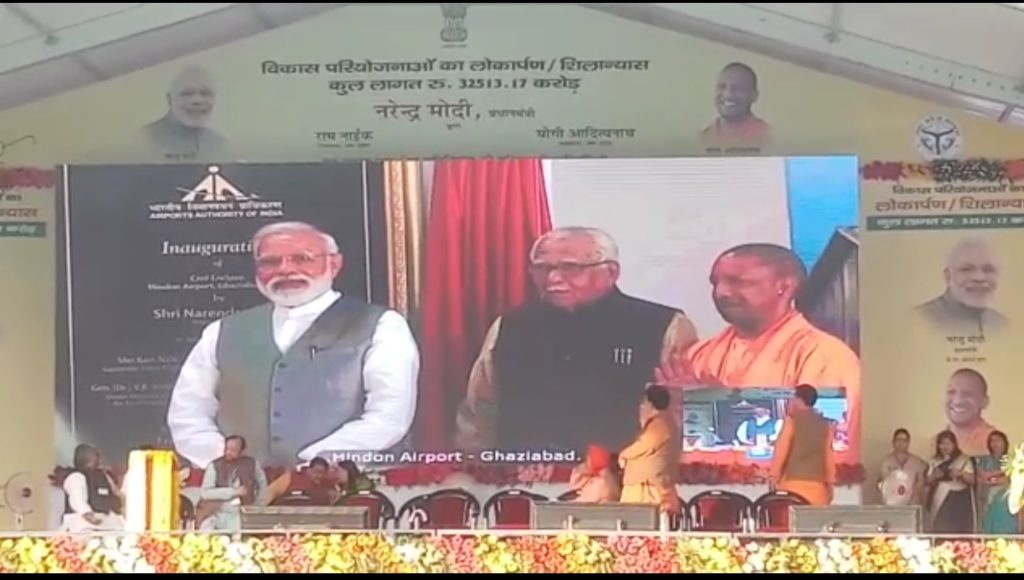 On the other hand, PM Modi also Inaugurated a civil airport near Hindon airbase, from where some smaller flight to different cities like Gorakhpur, Faizabad, Leh, Shimla, Jammu and other places which is likely to be started from May under regional co nectivity scheme. This was announced in the last budget in the previous year to promote and cover some smaller cities with flight services so that even middle class people can experience plane journey to smaller cities besides, atlest one hour of flight journey in Rs two thousand five hundred can be extended to common people and such persons who have wish to experience to travel in a flight can exlerience and utilise such services.

Prime Minister Narendra Modi on the other hand, laid down and also dedicated, unvill and Inaugurated several developmental projects exclusivly for Ghaziabad worth Rs 32.5 thousand crores. Prime Minister Modi arrived in the city at 3:,30 at Hindon Airport from where he teacher Metro inauguration site by road and dedicated Metro line from Dilshad Garden to shaheed Sthal, near New Bus Adda. This metro will line is an extended one of Delhi Metro from Dilshad Garden to New Bus Adda at Ghaziabad, near Mahamaya stadium. Thereafter 15 minutes Prime Minister Naredra Modi inaugurated terminal building of civil airport at village Sikandarpur, on the back side of Hindon Airbase, which is now a civil airport and the residents of Ghaziabad can move yo smaller towns like Faizabad, Gorakhpur, Lucknow, Jammu, Shimla, Leh- Laddakh directly from Ghaziabad airport. The flight services yo these place are likely to be announced soon and likely to be started from May 2019 onward. The exact numbers of flights are likely to be announced at later stave.

After inaugurating civil airport terminal at Sikandarpur, PM Modi adressed to the gathering from tbe stage where he announced various development projects exclusivly for the city of Ghziabad worth 32.5 thousand crores.

In his addressed to the people, PM Modi described, “in earlier governments Ghaziabad and Western UP were recognised asdifferently. But today the Ghaziabad is being recognised as 3 ‘Cs’ which stands for connectivity, cleanliness and capital i.e. which stands for entrepreneurship, hard work and capital of hard work.” Infact PM Modi wanted to describe this city will now be properly connected to national capital, secondlycleanliness of the city After adopting “Swachh Bharat Abhiyan”.
Prime Minister Narendra Modi also highlighted the achievment inform of constructing civilian airport terminal at Ghaziabad, which was hitherto recognised as defence airbase at Hindon.