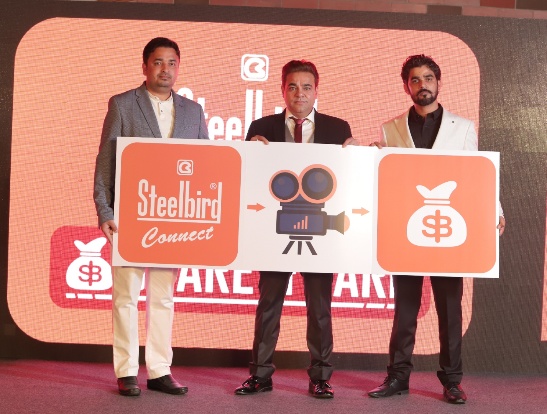 Gurugram/New Delhi: Cutting across different verticals such as helmets, retail, auto accessories and entertainment, Steelbird Group is now all set to carve a niche in the technology space with the launch of its unique mobile application “Steelbird Connect- Share & Earn”. It’s an ambition to synergise networking, socialising and also it will act as a great business model to earn money on Steelbird Connect- share & earnwith just a click.

The new social networking application is different from the existing ones such as Facebook, twitter etc and offer a quick route to earn while browsing through your favourite content on the internet. The biggest USP of this application is that it is a win-win game, for both, the person who posts something and the person who shares the same, leading to promotion. The application to run both on android and ios will be a changemaker in social networking arena.

Giving a sneak peek into the upcoming social networking application, Mr. Rajeev Kapur, Managing Director, Steelbird Group said, “Having made a mark in different spheres technology is another vertical that we have been eyeing for a while. To begin with steelbird has come up with a social media platform which is unique easy and mobile operated. This platform will basically provide a quick mode to make content viral. The core idea behind this development is using technology and internet to speedup business and reward the end users which is not at the moment in any of social platform.

Developed with a very simple and easy user interface Steelbird Connect-Share & Earn accumulates points on every share at the user’s account which can be redeemed easily through the shopping mall at application or on www.yooshopper.com and one can do endless shopping.

At present digital advertising is the fastest growing advertisement medium in India and the same is expected to continue in the foreseeable future with social media emerging as one of the strongest digital ad platforms. A large pie ie around 80% of this segment is being dominated by Google and Facebook alone.

Further commenting on the acceptability and increasing craze for social platforms in India, Mr. Rajeev said, “Currently India spends INR 108 billion on digital advertising to market their products and this figure is expected to grow @ 32%, much higher than the 11% overall growth rate of advertisement industry. Digital media currently constitutes around 15% of total Indian advertising industry and is expected to reach around 24% by 2020 which is astonishing when you consider that this platform barely existed at turn of this century.”

The increasing affordability of smartphones and low data consumption costs have given a huge flip to this sector. Steelbird has anticipated that its new tech vertical will capture minimum 1% of market share in next couple of months  and business transactions will exceed INR 1000 million per Year.

“The Steelbird Connect application has already crossed 200,000 downloads and within next 1-2 month we expect a 10 fold growth ie 2 Million downloads. The reason is with this application each and every Indian can earn SB Coins and which are redeemable. One can redeem these SB Coins by doing shopping at Steelbird ConnectShare & Earn shopping mall”. “In Steelbird Connect Shopping mall we will have more than 10,000 products so the user can shop all day to day items by just sharing the sponsored posts” added Mr Kapur

This application will also provide an instant and quick viral roadmap to all brands, multi-national companies , vloggers , social media celebrities , Singers & Artists. They just need to post the promotional video, photograph or any creative post on Steelbird Connect Share and Earn, apply a bid and that’s all. The application provides a freedom to select the bid price of per share which is the another USP of this medium. Higher the bid and the post will be shown on the top of the screen and better chances of quick sharing.

Through this platform the brands can increase their fan following and viewership at a very low cost as there sponsored posts will be shared by millions of users because they will prompted to earn SB coins by sharing these posts. If one person have 5,000 fans on facebook and 5,000 followers on share and Earn then by sharing one such post with bid price of Rs. 1 only the post will reach out to 10,000 audience and the cost of promotion per person will be 0.0001 Paise only.

Steelbird has set up an in-house development team in Delhi and Chandigarh which is responsible to take this vertical to next level.

Reservation benefits to the most backward if the forward castes are excluded from OBC: Prajapati