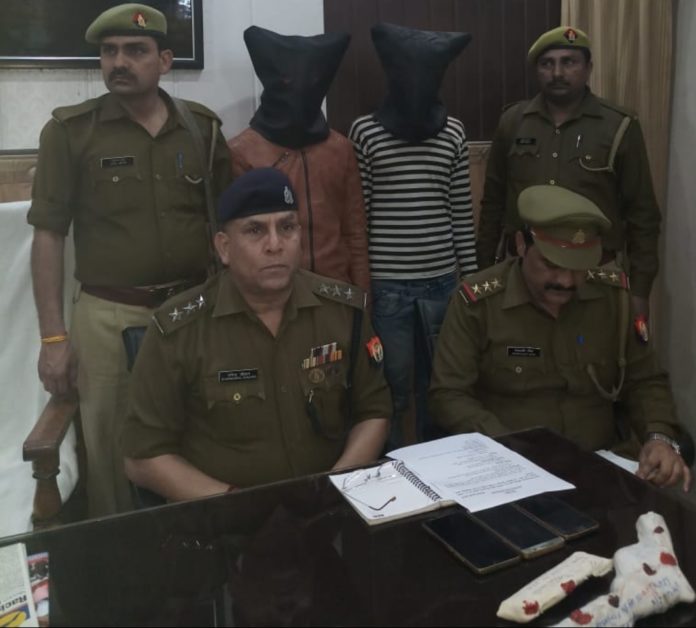 Ghaziabad:  Police Station Vijay Nagar police today arrested 2 persons having criminal background who are alleged to be committing crime and looting autorickshaw travellers,and had looted a Laws student of Govindpuram. similar to past two cases of loot committed in Indirapuram and Vijay Nagar respectively, this week in which one dentist and a B. Com student were became victims who had boarded autorickshaw from Noida.

Police also seized one .315 pistol, two live cartridges, one knife and one mobile phone from the possession of the arrested accused. The arrested accused Danish is a resident of Khoda, Ghaziabad and where as, another one Wasim is from Sambhali, district Hapur having 3 criminals cases pending against him in Ghaziabad. He is a habitual offender. During police interrogation they revealed that they used to attack single paseenger after showing them knife or revolver and looted the passenger. Today they were caught when police got certain inputs resulting their arrest.

Following the report of two cases of similar modus operandi committed in this week, in which two ladies were looted and became victims of such accused who used to attack auto travellers in the evening. In both the cases, victims were ladies, in one of the cases, the culprits looted the travellers and tied the victims. In one of the cases, culprits tried to rape the victim but she very intelligently handled the situation by asking the culprit she is already pregnant. Since then, police is under pressure to nab the culprit of both the cases after cracking its gang.

The arrest of two members of loot gang who used to attack on auto travellers, specially ladies during night, is an outcome of vigilant approach of local police and increased police patrolling and checking on the routes where crimes have been committed in the last 4-5 days.

The SP City Shlok Kumar while briefing A News Of India informed, as in the past two cases both the victims boarded autorickshaws from Noida. So we have broght the facts before Noida authority and shared inputs. We are further carring out investigations and culprits are likely to be arrested soon. Today we have succeeded in arresting two persons having involved in similar kind of cases. Infact there are a lot of autorickshaws registered outside Ghaziabad district and plying in the city. There is separate department like RTO who should be vigilant on such incidents of illegal plying of autorickshaws in Ghaziabad. But due to their constraint they are unable to monitor it. Still, we have taken a decision and banned plying of such illegal autorickshaws in the city as a precautionary measure, to control such crime. There are other issues also involved due to illegal plying of auto rickshaws including paperless, drive verification, unlicenced etc.  But we are working hard and we are sure we will arrest accused of previous two cases soon, as we are getting inputs and also sharing our inputs to Noida authority.”