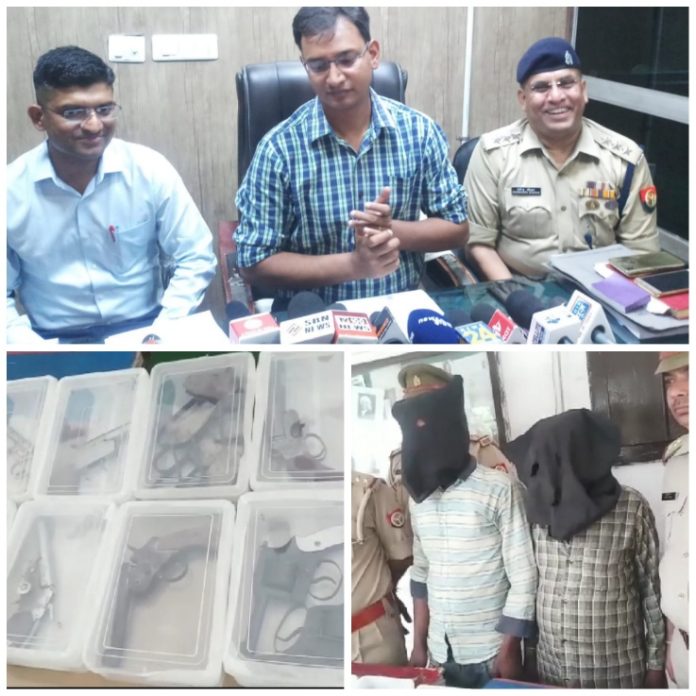 Ghaziabad: Vijay Nagar police today  busted an illegal arms factory running from a hut near Hindon canal.  In this regard, police arrested two accused and seized  illegal arms, arms making instruments, raw materials from the spot and also from the possession of arrested accused.

In view of Loksabha elections which is just round the corner and voting in the city is on 11th of this month itself, hence police is hearing up and don’t want to take any chance of risk. Due to this vigilant approach, and further subsequently police teams are  conducting frequent raids of all such questionable spots which may be used for any such criminal activities.

Accordingly, a similar raid carried out by police on a specific information and could know illegal arms which were being manufactured near bank of river Hindon, falling under police station Vijay Nagar.

In this regard Vijay Nagar police had received certain information about running of an illegal arms factory in Vijay Nagar area under police station.  After getting confirmation of this information, Station Incharge of Vijay Nagar  police team raided the hut near Hindon canal  and arrested two crooks from the spot.In this searching process, police seized certain equipments,
machines and raw materials which help to make illegal arms.

Autorickshaw’s crimes  reported last month from the same police station also reveals the above said facts and substantiates the very facts on the issue reported by A News of India.