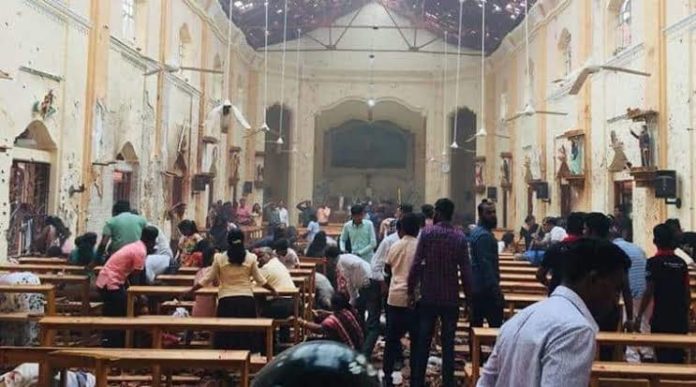 Srilanka: Nearly 200 people were killed and hundreds more injured in serial bomb blasts that rocked churches and hotels in and just outside Sri Lanka’s capital on Easter Sunday, officials said, pitching the South Asian island nation into the worst chaos it has seen since a bloody civil war ended a decade ago.

Sri Lankan government has declared curfew. It is not clear till when the curfew will be implemented. Temporary ban on social media imposed as well.

Lokashini, Narayan Chandrashekhar and Ramesh are among those killed in the terror attack. Indian High Commission in Colombo has conveyed that National Hospital has informed them about the death of three Indian nationals.

Three police officers were killed while conducting a search operation at a suspected safe house in Dematagoda, on the outskirts of Colombo. Last of eight blasts took place in this location. After police moved into Dematagoda, at least two more blasts occurred, with the occupants of a safe house apparently blasting explosives to prevent arrest.

Shops were closed and streets deserted in Colombo even before the government imposed a nationwide curfew from 6 p.m. to 6 a.m. Police spokesman Ruwan Gunasekara said 207 people were killed and 450 wounded in the blasts.

Two of the blasts were suspected to have been carried out by suicide bombers, a senior official told  Media. Worshippers and hotel guests were among the dead, the official said.

PM Narendra Modi als condemns the Serial Blasts, tweets ” There is no place for such barbarism in our region. India stands in solidarity with people of Srilanka. My thoughts are with the bereaved families and prayers with the injured.”