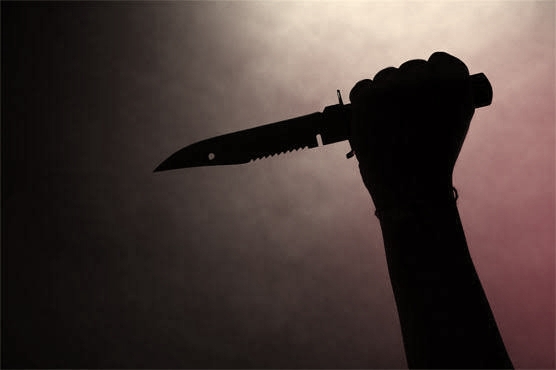 Ghaziabad: – A lover today killed his girl friend’s father in Morta village under Sihani Gate police station in Ghaziabad city. He was angry after his girlfriend’s marriage was fixed some where else, as both; the accused and victim’s daughter were in a relationship and she was engaged with another boy recently. Victim as well as accused are neighbours.

When the boy came to know that she has been engaged with some other person he was angry with his father and out of anger, he stabbed and killed girl’s father. The incident was carried out under Kotwali Sahani Gate. Frenzy lover started stabbing victim with a knife, when he was asleep, who had visited victim’s house along with his mother for finalising his marriage proposal with victim’s daughter.

After being stabbed, victim awaken and tried to come out of his home but the accused ran behind him and after catching him again, started stabbing on the open street in full view. Public gathered at the sight and any how pulled him out and carried the victim to MMG Hospital where he was declared brought dead.

Infact, the accused alongwith his mother had gone to meet girl’s father to accept the proposal of his marrige with victim’s daughter. But when he reached near him he pulled out knife and started stabbing the victim. At the time of the incident, the accused’s mother was an accomplice with him. The mother of the accused is also involved in the incident and has also been named in the FIR.

According to the gathered information, 45-year-old Raju was living with his family in the village Morata. He was living in Morta alongwith three daughters and his wife. He had no son. His one of the daughters was blind. Raju was a daily wager and nurturing the family after working as labour.

It is said that Honey, aka Kallu Dada, who was also living in the same street and was in love with victim; Raju’s daughter. He was stalking the girl for the last one and a half year and had threatened the girl if she would not marry him, then he would kill her father.

The wedding was scheduled for 17th May this month. Raju had sent his wife and all three daughters to his native village; Rohta in Meerut and since selling his house he had been living alone at home to Morta just to solemnise the marriage.

Today, on Thursday afternoon, Honey Goswami, aka Kallu entered Raju’s house with a knife. Raju was sleeping at that time. Kallu attacked sleeping Raju and stabbed with knife. As soon as the knife was barked, Raju got up and try to run but Kallu grabbed his collar and brought him out and hitting with a knife.

Even outside the street, Kallu carried out several attacked to the victim with knives. When Raju got unconscious and fell on the road, Kallu hit his head on the wall. Kallu’s mother was also involved in the incident. After the incident, both of them escaped from the spot.

The injured Raju was taken to MMG Hospital by bystanders, where he was declared brought dead. Multiple injuries have been found on his body. After receiving the information about the incident, the family returned to the village in the evening. After his death, there is no bread earner in his house. Police sent the dead body for post-mortem.

The SP City Shlok Kumar briefed A News Of India, “in Morta village a person murdered a girls father whom he was in love. Both , the accused and victim’s daughter were in a relationship for the last one and half years but the girls marriage was fixed some where else and she was engaged also. In a fit of rage the accused murdered the girl’s father after stabbing him with knife. Neighbour carried the victim to MMG Hospital where he was declared brought dead. During murdering victim, the accused had accompanied his mother to victim house who have been fled away from the spot. Police are searching both the accused. Police has lodged an FIR and body has been sent for post mortem. They are likely to be arrested soon.”