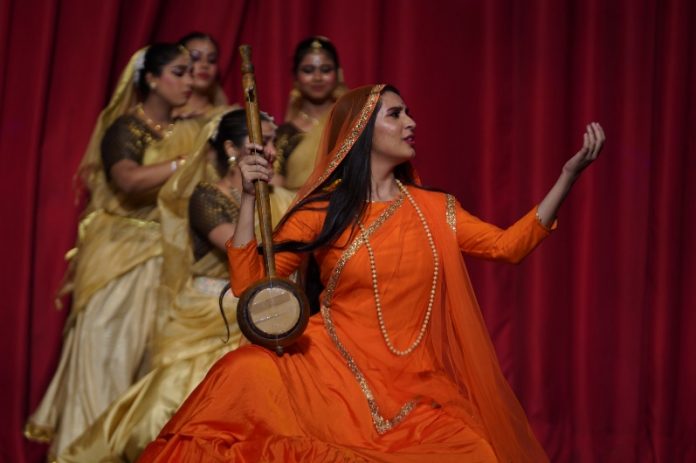 Today’s showcase of victorious journey of Saint Meera Bai through contemporary classical dance forms witnessed an impressive gathering. The evening captured facets of Meera Bai’s life along with her spiritual journey. The performance was an impressive amalgamation of thought-provoking narrations, stunning visuals and costumes followed by magnificent choreography.

A contemporary take on the revolutionary saint, Meera Bai, directed by Sri Vidya Varchaswi, the musical was a perfect blend of drama, emotions and entertainment. 90-minute musical touches upon poignant moments of her victorious journey, with colourful dynamic sequences enriching the experience

Adding to its charm were different classical dance forms which were presented when Meera’s story took different turns. From Bharatnatyam to Odissi, and Ghoomar to Gair, popular Indian folk dance performances delighted the audience.

Right from the acting, costumes and effects to the stage setting, everything was perfect and on point. Viewers were mesmerised by the songs especially which had the correct folk flavour.

Audiences were seen enjoying the experience and clapping every time Meera Bai performed. Apart from the music and dance, acting was another big takeaway here. The actors left no stone unturned, effortlessly striking a chord with the audience.

The musical is directed by Srividya Varchaswi, famed choreographer and artist based out of Bangalore. One of her most acknowledged compositions has been Cosmic Rhythm, a dance drama which presented 30 dance forms performed by 4600 dancers from 45 countries. The event, which was supported by Sri Sri Ravi Shankar’s Art of Living Foundation, was a fundraiser that aimed to raise funds for the free education of underprivileged children, and improve their future.

The proceeds from the production will go towards supporting the education of over 70,000 students studying in 700+ free schools run by the Art of Living in tribal and rural areas of India under the Gift a Smile project, where 90% of the children are first generation learners.