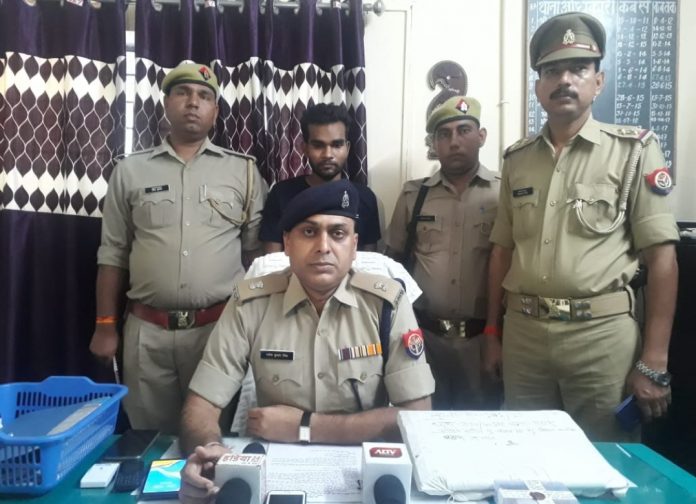 Bulandshahr: PS Pahasu solved a loot case and arrested a accused in this  regard and recovered a laptop and Rs. 20,000  from his possession.
Victim was working as associate with Allahabad. bank. When he was returning back his home after finishing hai bank work in evening. As soon as he reached at Banel areas he was stopped and robbed more than 1 lac rupees and a laptop by three robbers.
A complaint of loot was loaged in PS Pahasu where Dinesh Pratap Singh Inspector  took this serious and arrested a accused
According to Manish Yadav, Circle Officer, PS Pahasu, ” With help of SWAT team PS Pahasu arrested a accused who identified as Nadeem  resident of Pahasu, He has involvement of loot with  worker of Allahabad Bank with his two associates. As per police report, he robbed more than one lakh rupees and a Laptop & mobile phone from victim.”
Police arrested him from Khurja road after getting information by informant. His two associates still absconding police trying to  catch them, police recovered Rs. 20,000 and a Laptop from his possession, he added.