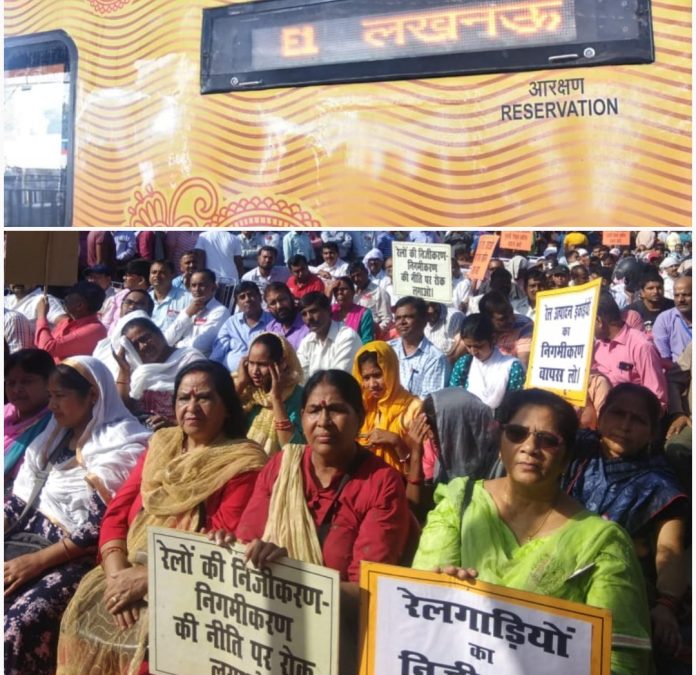 The Ministry of Railways has started a new Tejas express between Lucknow to New Delhi cutting journey timing from 2 to 3 hours in comparison to Shatabdi and other trains already running in this route.

However, the Railways employees under the banner of All India Railways Men’s Federation, has protested the move of government and are seeing it a move ahead towards privatisation of India Railways too.

The General Secretary of All India Railways Men’s Federation,; Shiv Gopal Mishra while informing News Editor of “A News Of India” described the move of the government towards privatisation of Indian Railways. He told, “we are protesting due to many reasons and today Railways employees protested at many stations right from Lucknow from where the Tejas Express was given green signal and inaugurated by UP Chief Minister Yogi Adityanath, Kanpur, and many other stations against running of Tejas Express by Indian Railway Catering & Tourism Development Corporation(IRCTC) instead of Indian Railways. Firstly the reason is are we not capable or competent to run Tejas Express when we are handling and running so many trains including Rajdhani, Shatabdi, Gatiman and important trains? Is it possible we cannot run Tejas Express? Infact there are so many reasons to protest against government move to run Tejas by IRCTC including econdly; to run this Tejas Express, timings of 6 trains have been rescheduled justifying this move by saying if the Tejas will be delayed the IRCTC has to pay compensation or penalty to the travellers for delay in each hour. Further government says that we will run 150 similar Tejas Express in near future it means atleast 900 trains will be affected out of it in future,  due to rescheduling of these trainsto run these 150 Tejas Express as per government plan which is in pipeline, thirdly; when passengers are travellings to the same distance in between Rs 600 to 700 why pickpocketing of the railway passengers are being carried out by government in the name of Tejas Express and in the hands of IRCTC and a fare of Rs 1300 are charged by IRCTC as against Rs 600 to 700 ? It is just a move to promote private players through IRCTC and  hand it over the running of trains by private players. Infact, this is one step ahead towards privatisation by government and this move is basically to hand over trains to private players like Adani and Ambani. This is not the solution. See we have one organisation under Railways; Container Corporation Of India(CONCOR), a Kanpur based “Navratna” which has always given a handsome dividend to the government. Presently in CONCOR the government has 54% stake. Now the government is working to divest it further to the tune f 24% stake in CONCOR then what will happen, the CONCOR will have a private entity. Privatisation is not only the solution of all these problems and thus to hand it over to big business houses will be a move toward selling our country. This move by any government whether the present government or the previous government is not acceptable to us and we will protest the privatisation of Indian Railways untill our last breath.”

Whether government is planning to privatise the Indian Railways in the name of Tejas Express and or providing good services through IRCTC and selling or running these special trains are practically a move to promote private players and the Railways employees are seeing this move as red light Indian Railways where trains cannot move untill green signal is given. Although the employees of Railways have shown red signal to the government who is about to privatise Railways in the name of Tejas through a false shell of IRCTC. But no doubt, running of Tejas Express trains might not be and easy task by IRCTC due to penalty clause and maintaining the punctuality of this train shall be very difficult witjout the support of Railways employees for IRCTC, as all the aspects of running trains right from signalling to maintenance, besides timely departure a