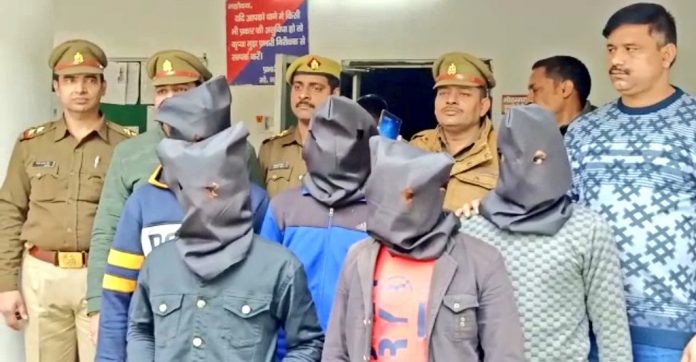 Ghaziabad: Kavinagar police nabbed 5 accused who were trying to break ATM machine in mid night. Police seized a hammer, 3 country made pistol  from them.
In cold mid night Kavinagar police were on petroling at Govindpuram areas. When police team moving towards Baba market near signature Mall, 5 person looking suspicious front of ATM machine. A person having hammer trying to escape from spot and other started fire.

According to Manish Mishra SP City Ghaziabad, ” Police saw 5 suspicious person at ATM machine in Govindpuram area’s one of them had hammer police came to know something is wrong and trying to catch them and finally all 5 accused namely Ankit, Vishal, Shivam, Vikash and Prince. All accused are resident from Pilakhua, Hapur District.”
“In police investigation it came in light that all 5 accused  used to take money by breaking the ATM machine in NCR areas” said SP city.