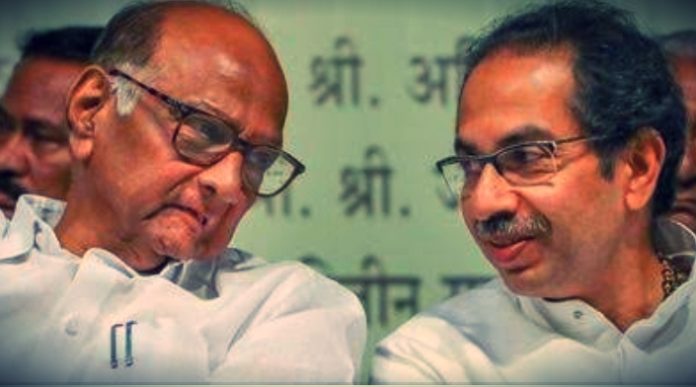 The western Maharashtra leadership of Sharad Pawar’s party was hijacked by BJP and thus to repair this damage control exercise, Sharad Pawar appointed seven newly elected MLAs as cabinet minister in the Uddhav Thakre ministry. Infact, Sharad Pawar tried to repair his loss to party through this cabinet expansion, where CM Uddhav couldnot make any difference to it.

While forming the ministry in Maharashtra today CM Uddahav seemed keeping very low profile except enjoying his son Aditya as a cabinet minister in his cabinet.

Those parties members who supported Shivsena in forming new government to keep BJP out of power, are now openly criticizing the present government for not even giving invitation for swearing in ceremony of ministry formation.
Editor of Shivsena mouthpiece and Rajyasabha MP of Shivsena Sanjay Raut who played vital role in asking and getting full support of Sharad Pawar to form government in Maharashtra under leadership of Uddhav to keep BJP out is also said to be not happy as his brother Sunil Raut has yet got a birth in Uddhav ministry. A total 26 MLAs as got cabinet status and 10 as state minister took oath today while Maharashtra BJP boycotted this cabinet expansion. Although, till date portfolios are not allocated to any minister but Ajit Pawar the nephew of Sharad Pawar took oath as deputy CM.

Ajit Pawar’s loyal MLAs almost got position as minister in the present government.

Now in Maharashtra the real battle to run government for five years has now started. Most veterans are saying that this unnatural government will soon be fighting over one another issues. But Shivsena will be fighting for survival of its own as already party unit is already facing fraction over CAB issue. Many Shivsena second level leaders are objecting Shivsena stand over CAB issue under pressure from Congress and NCP with whom support it has formed government.