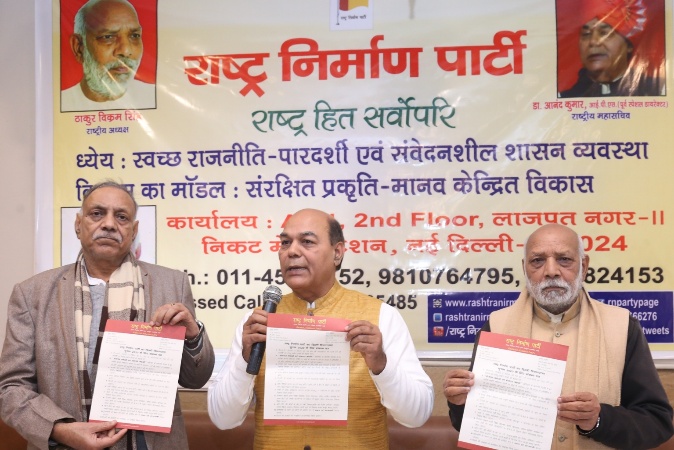 In last two months, there have been many incidents in Delhi in which common people were affected; there have been three arson accidents in which more than 52 people were burnt alive and more people were injured and besides loss of property. There were poor migrants who died in these accidents, Factories operate without license in Delhi, where these workers have neither insurance nor any medical facility, yet thousands of factories, hotels and markets are running where the fire brigade vehicles cannot reach, No government, no department takes responsibility for this chaos, these question were raised by Dr. Anand Kumar, National General Secretary of the Rashtra Nirman Party and former Special Director of Ministry of Home Affairs, while talking to journalists at Indira Gandhi National Center for the Arts. He said that this type of disorder is not only in one area but in the whole of Delhi. Not only this, the problem of pollution in Delhi has become unmanageable, the air and water are poisonous, Yamuna river, drains, lanes are full of filth & dirt, today the condition of Delhi is worse than hell and for this AAP, BJP and Congress parties are  responsible. A new method of corruption is has emerged in the form of freebies to buy votes, using the tax money even by general public for developing system. All political parties are complicit in this matter. On the one hand we are committing the sin of making society beggar & also want to keep them poor by not making them self-dependent.

On this occasion, President of the Rashtra Nirman Party Thakur Vikram Singh said that once the watchdog of corruption and agitator in the name of corruption has become synonymous with corruption today, now there is no discussion on Lokayukt. Government had promised for giving jobs to 8 lacs unemployed youth but they have given employment to their near and dear ones, is this called governance, now governance has been replaced by advertisement & event management; it has also become a new type of corruption. AAP, BJP & Congress all are competing with each other in this field. I call upon youth to rise above the politics of caste, creed and regionalism and move forward for the happiness, prosperity, education and health of all Indians, National interest is paramount, We request the youth to join the Rashtra Nirman Party and become partners in building the India of their own dreams and the dream of martyrs who had sacrificed their lives for the country. In order to eliminate this Disorder/ Anarchy and develop good systems, we are determined to fight for 70 seats in the ensuing assembly elections of Delhi.