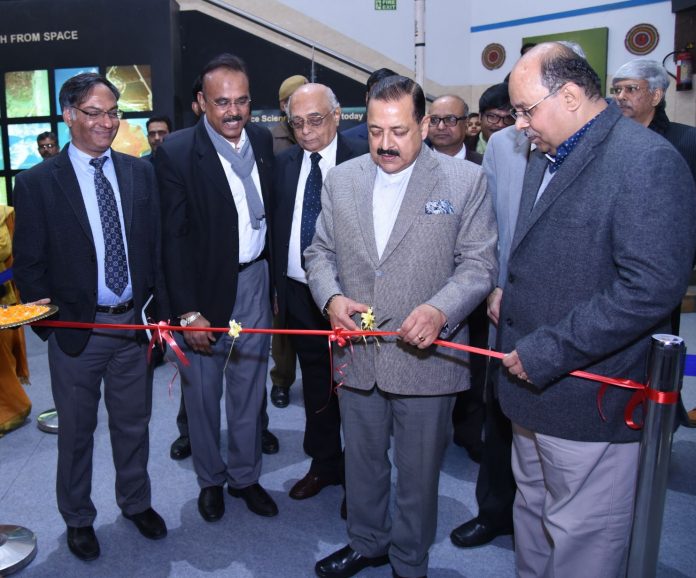 New Delhi: With the world’s major Science projects on display, India’s first-ever, global Mega-Science Exhibition, ‘Vigyan Samagam’, finally arrives in the Capital city of India to awe the science and technology enthusiasts with the path-breaking contribution of India in world’s largest scientific experiments and major fundamental breakthroughs in modern science.
Under the aegis of Department of Atomic Energy (DAE), Department of Science and Technology (DST) and the National Council of Science Museums (NCSM), this prestigious science exhibition Vigyan Samagam is being jointly organised. These three organisations will be hosting some of the world’s biggest science projects under one roof. The capital will be marking the completion of this caravan event. The exhibition will be open to public till 20th March, 2020.
Today, Dr Jitendra Singh, Hon’ble Union Minister of State (Independent Charge), Ministry of Development of North Eastern Region; Minister of State, Prime Minister’s Office; Ministry of Personnel, Public Grievances and Pensions; Department of Atomic Energy (DAE); and Department of Space, inaugurated the final edition of the event at National Science Centre, Delhi (NSCD).
Speaking on the occasion, Dr. Jitendra said, “I congratulate Department of Atomic Energy, Department of Science & Technology and National Council for Science Museums for organising this mega science Exhibition. With over 5.50 lakhs visitors at Vigyan Samagam in Mumbai, Bangalore and Kolkata, it is in New Delhi now, it will provide students, academia and industry a great opportunity for cross-fertilisation of ideas. Exposure about different aspects of these projects will help students to choose science as a carrier option; academia in carrying out science runs and deriving innovative results.”
The Minister also reiterated the importance of Science & Technology in country’s development at ground level and its overall progress in the country.

Prof. Ashutosh Sharma, Secretary, Department of Science and Technology (DST) said, “India is diligently preparing to be well versed in the area of innovations and experiments, the new generation is focused and will stop at nothing to secure a respectable position for India in world Science domain. The programmes at Vigyan Samagam will popularise science and technology among students and the people.”
Mr D. Rama Sarma, Director, National Science Centre said, “It is an opportunity for us to host Vigyan Samagam. Organisation of such high-tech science exhibitions will help in stimulating creativity and innovation among students and generate interest for these subjects. Having knowledge and understanding of advancement in science and technology will not only help the enthusiasts but also the people at large in various other professions to to excel in their field of activity or profession. ”
The Exhibition is expected to ignite the minds of students, academia and industry to look for opportunities to pursue fundamental science and research as a strong career option. These projects will help our scientist to work and contribute to international collaborations on fundamental science and research.
The Exhibition has themed galleries consisting of infographics, working models and exhibits, informative audio-visual content, electronic displays and interactive kiosks for each of the Mega Science Projects. A one-day scientific event comprising of invited talks and lectures by eminent speakers from the field of science, technology and Industry has been held at the NSC. As part of project awareness activities, each participating project will be carrying out a week-long activities consisting of popular talks, science demonstrations, interactive quiz programmes, etc.

Grass-root level outreach programmes across the city in schools and colleges to promote this exhibition will also be an integral part of the event. For tech savvy people, regular updates will be shared across the digital and social media platforms of Vigyan Samagam.
The details about the exhibition, projects and schedule are available on the Vigyan Samagam website www.vigyansamagam.in and also on the mobile app Vigyan Samagam. Events such as talk shows, lectures planned during the Exhibition will be available in digital platforms and through popular social media platforms. The Exhibition will be open on all days including Saturdays, Sundays and Holidays till 20th March 2020 from 10 am to 6 pm.