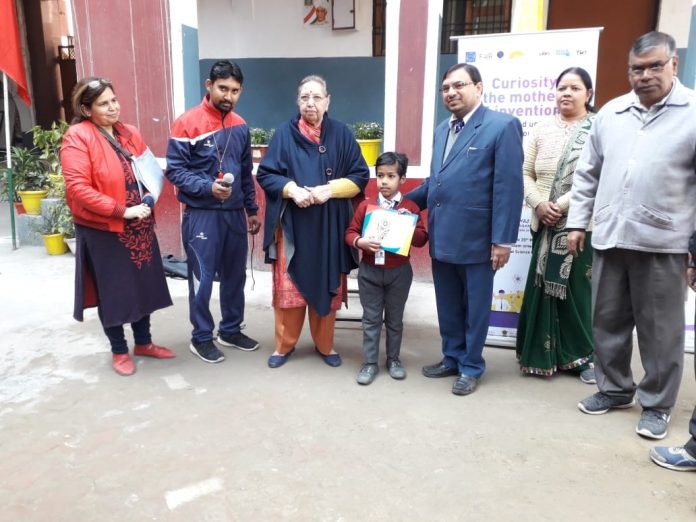 New Delhi: To inspire students towards becoming the future scientists of India, ‘Vigyan Samagam’- a one of its kind and first ever mega science exhibition in India organised by the Department of Atomic Energy (DAE), Mumbai together with Department of Science & Technology (DST), New Delhi and curated by National Council of Science Museums (NCSM), Kolkata, organized an Essay Writing competition at Shivani Public School, here in New Delhi, as a part of nationwide campaign to promote science.

The essay competition saw more than 300 students showcasing their thoughts towards science. With the theme ‘Can we live without science?’ students from class 5th to 8th standard expressed their opinion with meticulous writing.

Reviewing the essays written by students, the esteemed panel of judges admired the views put in by the participants from various age groups about science. After assesing the results, the judges announced Kashish and Muskan both from 8th standard as winners. Gaurav from 7th standard and Sanya from 5th standard were awarded as first and second runner up.

Overwhelmed with the participation, Mr. Sumit Sharma, Principal, Shivani Public School said that he is delighted to see the efforts put up by the team of Vigyan Samagam at various schools to promote science among children. He also said that activities like this will help in shaping mind of the students at the right age.

The team of Vigyan Samagam urged principal and students to visit the exhibition to have first-hand experience and to get a chance to meet with scientists for the quench of their curiosity related to Science.

In order to populate science and develop scientific temperament, Vigyan Samagam has been organizing activities at different schools across New Delhi. The idea behind this exhibition is to demonstrate the technical ability and scientific acumen of Indian Scientists in global mega science projects like CERN, FAIR, INO, ITER, LIGO, MACE, SKA and TMT.

Vigyan Samagam is currently open for public till March 20 at the National Science Centre, New Delhi. The exhibition will remain open on all days from 10:00 AM till 06:00 PM including holidays. For additional details, science lovers are requested to visit the website www.vigyansamagam.in and its social media handles. They can also download and installed the specially created App Vigyan Samagam for further inputs.