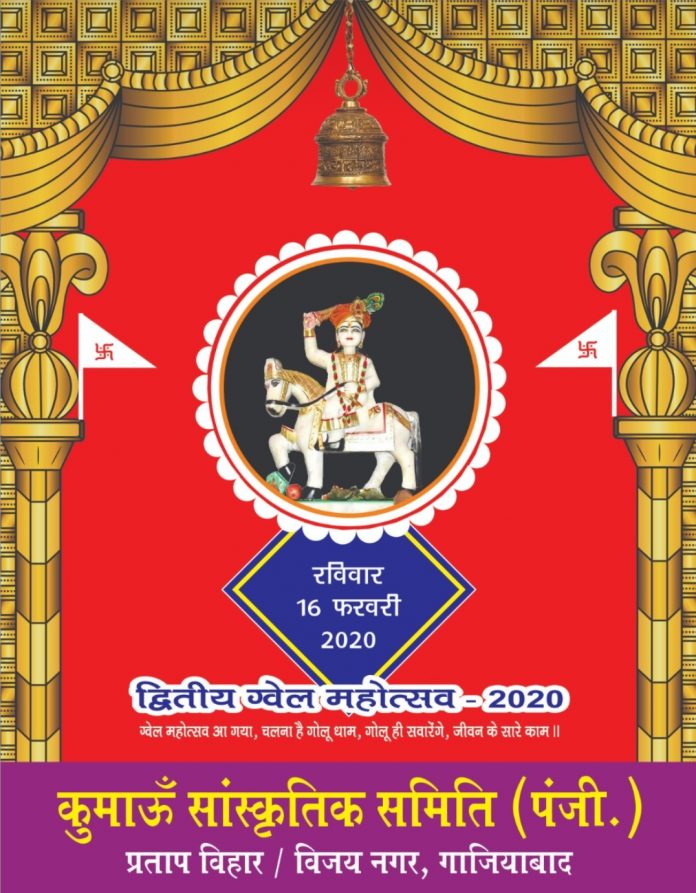 A News Of India Bureau

Ghaziabad: Like last year, this year also, Gvel  Festival dedicated to the Ishta devta of , God of Justice “Golu Dev” of Uttarakhand with great pleasure and enthusiasm from 16-17 February 2020 at Ghaziabad where all Kumaon community from Delhi-NCR areas will be actively participating in this festival where a lot of activities will take place; including fair, Kumaon,s delicacies, Uttarakhand’S  food,Music, Folk and other regional dance and drama with full zeal, dedication and enthusiasm.

This would be second such Gvel festival to be organised in Delhi-NCR areas where crore of Kumaon’s community reside. This festival will be organized under the banner of Kumaon Cultural Committee (Regd.) Pratap Vihar / Vijay Nagar Ghaziabad. Organizing the event, the organisers of the event have marked all the experts from different filed right from music, art,art & cultrure, literature, laurate, poet, musicians etc. and invited them to participate in the event to make it a great success and bring them under single umbrella of Uttarakhand Kumoan’s society residing in Delhi NCR areas.

One of the Organisers, informed that all migratory population of Kumaon’s ask Isht Devta of Kumaon’s society. Infact, in ancient period, The Uttakhandi used to pray God Golu devta and treat him diety as God of Justice when they were denied justice during ancient period. A famous Chitai Golu Devta Temple Almora district famous temple of God Golu devta is bulit at Ghodakhal near Haldwani in Nainital district &which is commonly known as “Ghante wala mandir” where one has to offer ghanta of brass when thier wishes are fulfilled and accordingly this temple was named as “Ghante wala Mandi” at Ghodakhaal.

This festival may attract visitors in greater numbers to this grand celebration like previous year as organised by Kumaon Cultural Committee. This will also give ample scope to Kumaon samaj of Delhi-NCR areas to show case their talent and or enjoy the festival with their rich cultural heritage in this regional after leaving their roots in Uttarakhand. By organizing such programs, all get together of people in its original roots under one roof can be seen where  they are connected with their culture, as informed by  in-charge of the festival committee; Shri Mohan Singh Rawat ji, while talking to A News Of India.