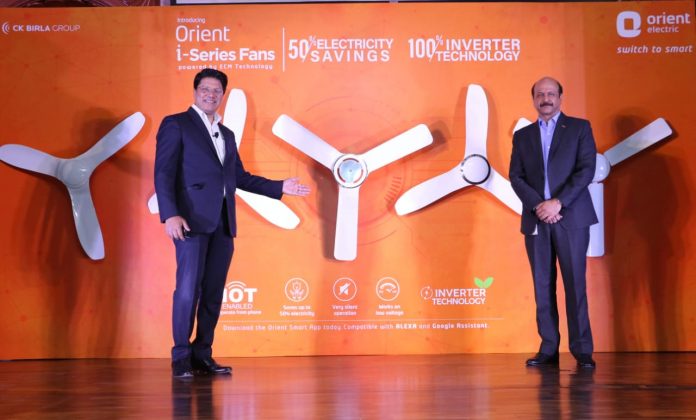 National: Orient Electric Limited, part of the diversified USD 2.4 billion CK Birla Group, has launched its new i-Series range of fans powered by ECM technology that saves 50% energy as compared to ordinary fans thus promising a significant reduction in electricity bills for consumers. The new range includes i-Floral, Hector 500, and IoT-enabled & voice-controlled i-Float fan in a variety of colours and designs to suit any setting and décor. The launch is part of company’s plans to emerge as a frontrunner in the segment of energy efficient fans while also gaining more ground in the premium fans segment.

Rakesh Khanna, MD & CEO, Orient Electric Limited said, “We have been consistently focussing on developing products which are innovative and disruptive. Acknowledging the climate emergency, the rise of environmentally conscious consumerism and the Government’s push for energy conservation, we are proud to launch our new i-Series range of inverter motor based fans which are smart, energy efficient, IoT enabled, and environment friendly. The I-series range is another leap in this direction to bring world class technology at affordable prices. India is a huge market for fans and you can imagine the amount of energy savings and cost savings it can bring to the consumers and the country. It is our commitment to the cause of environmental protection by developing energy efficient products and contribute in reduction of carbon footprint.”

Atul Jain, Executive Vice President, Orient Electric Limited said, “This is an opportune time for Orient to launch this range given that the BEE energy efficiency norms are becoming mandatory for fans from July 2020. The fact that these fans consume 50% less energy, means that the carbon footprint is also reduced.
He further added, “While traditional induction-motor based fans consume 70-75W of electricity, Orient i-Series fans consume only 35W thus reducing power consumption by half. With a modest assumption, if all fans installed in India are replaced with i-Series fans, it will help the nation save 10.4 crore MWh of energy* annually with cost saving of approx. Rs. 67780 crore. If the new ceiling fans sold also come with inverter motor, the savings will be bigger and incremental. As a responsible brand, this new range is a conscious effort from our side aimed at helping India to save energy and reduce carbon footprint.”

Orient i-Series fans are BEE 5-star rated and have 50% better service value than the ordinary fans. These fans deliver an astounding 230 CMM of air delivery and operate silently and efficiently even at low voltages which is a common problem across India. The new range includes three variants namely i-Float, i-Floral and Hector 500 featuring aesthetically pleasing designs, aerodynamically designed, super-efficient noiseless motor, 100% rust-free blades and high gloss premium finish. The i-Float fan is IoT-enabled and can be operated with utmost ease via Orient Smart mobile app or with voice commands via Alexa and Google Assistant. Pricing for the Orient i-Series fans starts at Rs. 2850.