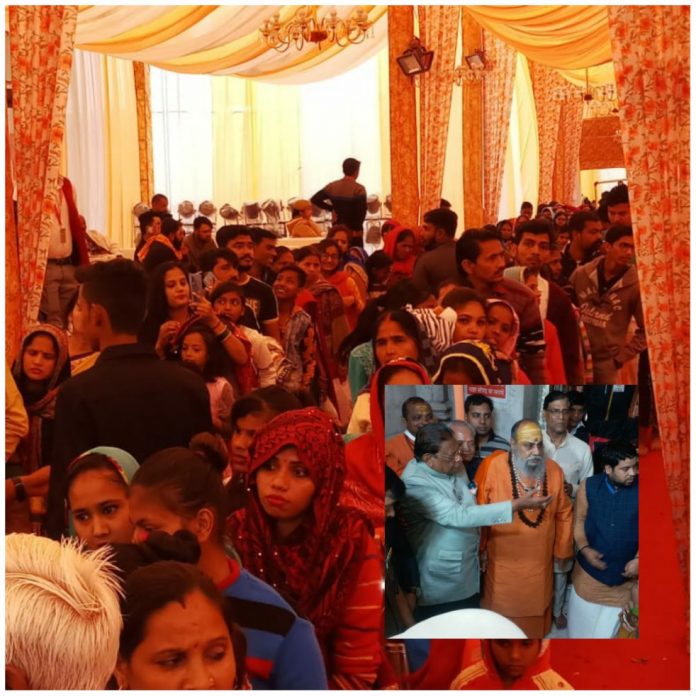 Ghaziabad: Millions of devotees performed Jalabhishek on Lord Dudheshwar at the Siddhpeeth Shree Dudheshwar Nath Math Temple, Ghaziabad, to perform Lord Shiva’s Jalabhishek on the Maha Shivaratri of Falgun. And with the cheers of Bam Bam Bhole, devotees offered Jal on the Shivling. By offering milk Belpatra flowers and Panchamrit to his beloved Devadhidev Mahadev, he asked for his vow. Shrimanhant Narayan Giri Maharaj of the Shri Dudheshwar temple and Dharam Pal Garg, president of the Mandir Vikas Samiti, offered Jalabhishek on the shivlinga late on Thursday, after which all the devotees started to perform Jalabhishek, from late night, huge queues of people started, as the day passed. The queues got longer and longer, even in the afternoon, the line continued beyond the district hospital, for which the civil security organization in the system Warden, are deployed member of the temple committee, along with the police authorities and the SPO. For this more and more volunteers were engaged and devotees performed Jalabhishek in auspicious time. Devotees performed Jalabhishek under the surveillance of CCTV cameras by the temple administration under the supervision of the police. And sitting in the control room, every activity of the temple complex was monitored.

The international spokesperson of Dudheshwar Peethadhishwar and Juna Arena, Shrimhant Narayan Giri Ji Maharaj said that this time on Mahashivaratri, Shash Yoga is after 59 years. This yoga holds special significance for the accomplishment of meditation. For the accomplishment of spiritual practice. The festival of Mahashivaratri is very important for those who follow the spiritual path. This festival holds great importance for the people living in family situations and also for the aspirants. Those who are householders among the family celebrate Mahashivratri as a celebration of Shiva’s marriage. People surrounded by worldly ambitions find this day important because Shiva conquered all his enemies.