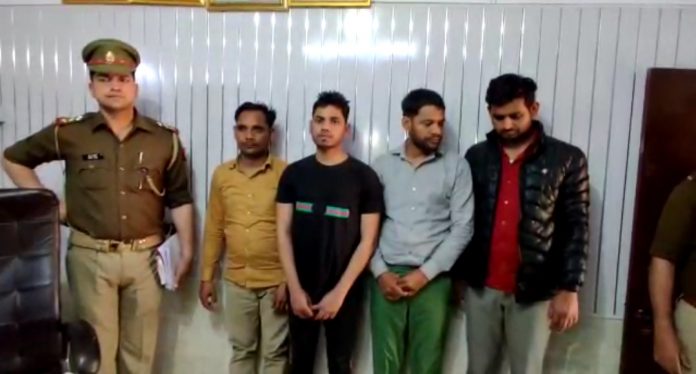 PS phase third got success in arresting of 4 accused in charge of making fake Aadhar card illegally. Sub inspector Varun Panwar received an information about making fake Aadhar card .
As per information he discussed with his senior and started special operation at Chijarsi locality and  On the basis of information, Varun Panwar  raided in mid night at chijarsi areas with his team and arrested four people red handed.
According to Sub Inspector Varun Panwar, ” We had input that some people are making fake Aadhaar card and other documents illegally and getting money by this illegal work. In mid night we raided at chijarsi colony and arrested Shamsher, Sachin,Vijay and Sarvan on spot. Our team seized Laptop, Finger Scanner machine,Android mobile phone, Other instrument  and fake Aadhar card , Pan card and other suspicious documents regarding this.”
“In police investigation it came in light that Shamsher is the master mind of this intire game. He made a gang and started making Aadhar card.  In Delhi NCR, now thousands of people have been forged in the name of making documents” said Varun.