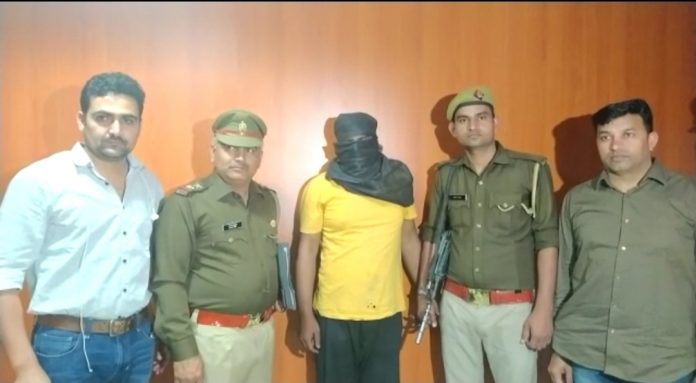 Noida: PS Sec 24 police arrested a accused of robbery with fired at Jewellers shop.
Police also recovered 40 percent robbed jewellery and used bike, gun for this crime.
At sector 12 on dated 13rd feb 2029, some unknown person entered in Kamal Jewellery Shop and robbed jewelry from there
When the shop owner opposed it, these people opened fire on him.

According to Sankalp Sharma, DCP zone 1″ A crime of robbery and firing at Kamal Jewellers shop under PS 24, theree person did this crime.
We were trying to catch robbers and finally a accused Nasir was arrested out of 3 , 2 are still to arrested soon. police arrested him from Delhi. Nasir has more than criminal cases have been  registered in many police station of NCR.
Police seized a bike and gun from his possession and also recovered 40 percent robbed jewellery from his possession” ” Earlier, these people used to take the place around by bike and then loot it and shoot it if any one opposed it” said DCP.