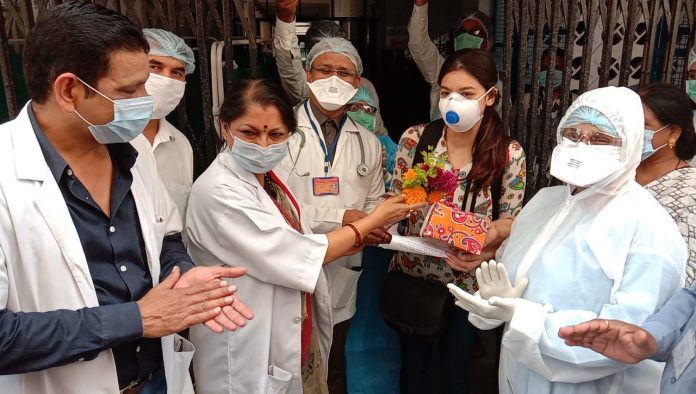 Moradabad: A brave daughter of Moradabad, who was creating a furore in the country and abroad, took a good farewell from the district hospital moradabad, today and asked the people of the country to fight the war against Corona and also thanked Prime Minister Modi.

For more than three months, the corona virus has created an epidemic in more countries including India, this deadly virus has brought a superpower like America on the knees, if we talk about India, then the entire country  Locked down, and today thousands of people across the country have been imprisoned by hospitals, coronated by Corona
But the picture which has come out from the district hospital of Moradabad district of Uttar Pradesh is probably the better picture of fighting the battle of life, in fact, Varisha Shukla, resident of Moondapande area of Moradabad, being a corona patient, was isolated for treatment on March 21.  Was admitted to the ward, which after recovering completely after treatment today, when the hospital staff left for their home, the hospital staff cheered loudly  Welcome, this brave daughter of Moradabad has set an example for the countries where Corona has killed thousands of people, Varisha said in the message to the country that do not be afraid, just stay safe.  If there is any possibility of infection, then go to the hospital and get treatment immediately.