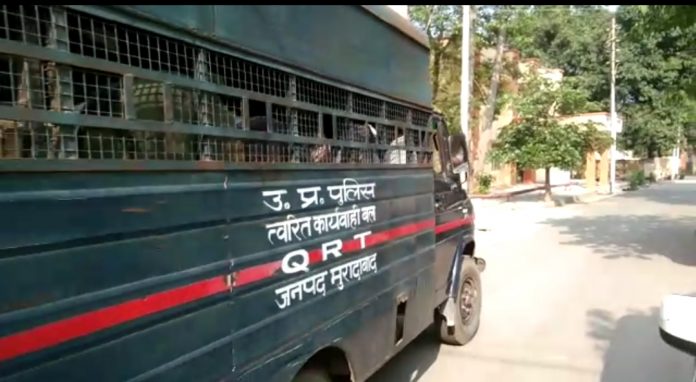 Moradabad: Eight Indonesians who came to India for meeting Tabligi jamat at Nijamuddin Merkaj, Delhi last month and were moved out of Delhi for taking shelter in order to douse Delhi police to evade their arrest, were sent to judicial custody in Moradabad today on the direction of Chief Judicial Magistrate’s court when they completed their fourteen days quarantined period today and produced before the court alongwith 2 other jamatis belonged to Tamilnadu. They all ten Persons were found and arrested on first of this month from a local Mosque at Thakurdwara in Moradabad folliwing after FIRs were lodged against all of them, besides other two jamatis who were from Salem in Tamilnadu. These two jamatis were granted bail by CJM, Moradabad today and were released on bail.

The above said eight Indonesians who found from a local mosque of Thakurdwara in Moradabad, along with almost two a dozens of other jamatis who were also found from the same mosque and had attended Tabligi jamat in Nizamuddin Markaj at Delhi last month. They left Delhi when Delhi police started arresting them in order to conduct their Corona test for further preventing spread of Corona virus in third stage; I.e. community transmission.

When these jamatis were being quarantined in local quarantine centre in Moradabad and after their quorantining period was over today, they were produced before the CJM today following after the Moradabad police had lodged FIRs against all this 8 Indonesians under various sections of IPC, Passport Act, Epidemic Act, Disaster Management Act, Foreigners Registration Act etc. However two jamatis from Salem were released on bail.

The Moradabad police Circle Officer, Thakurdwara; Vishal Yadav said, “these foreigners were arrested on 1st of April from Thakurdwara Mosque and FIRs were lodged against them under IPC, Passport Act, Foreigners Registration Act, Epidemic Act, Disaster Management Act. Further all of them were sent for medical test and thereafter they were sent to quarantine centre for 14 days quarantined period. Today they completed their quorantind period and were produced before the CJM’s court, from where they were sent to judicial custody. The ither two jamatis who were from Salem in Tamilnadu were granted bail by CJM and released on bail.”