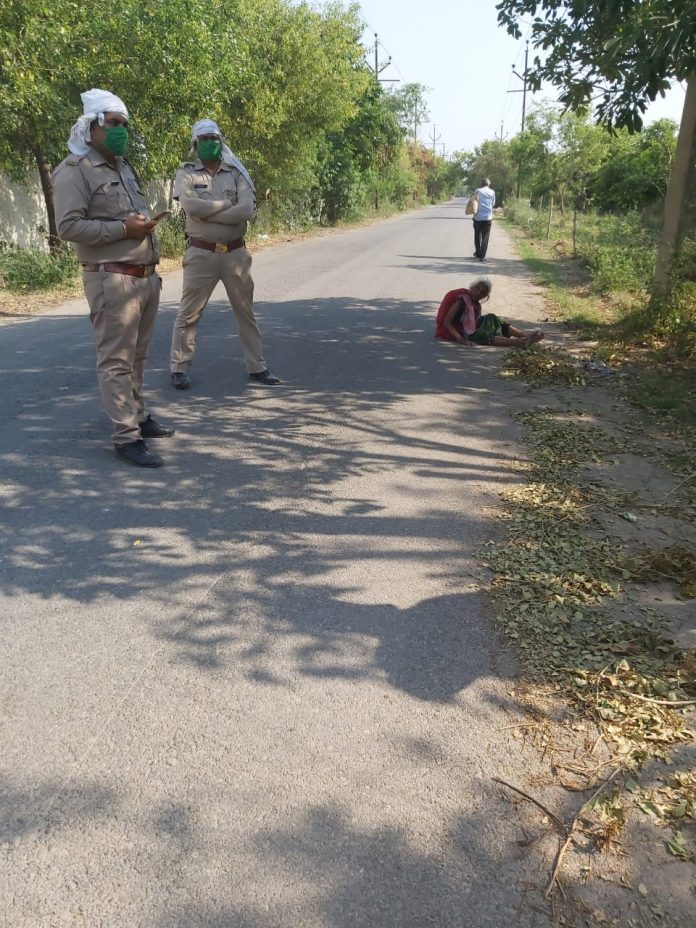 Ghaziabad:On one hand the health personnel who is directly responsible to show his sensitivity towards patients specially in this emergency period of covid19 crisis but he denied his services to an elderly women, on the other hand, the sensivity of Ghaziabad police came to light where the Vijay Nagar Police station, not only taken due care of this lady; a senior citizen and extended full support to her but also connected her to family to whom she had forgotten due to her old age memory loss and was missing from her family residing in Nehru Nagar, from last day.

Vijay Nagar Police station where the women had came and had forgotten road leading to her home in Nehru Nagar and was loitering near Santosh Medical College in search of her home.

Anand Vajpayee (passer by) was mooving there he saw that old lady and asked her name but she couldn’t reply to him. Anand Vajpayee called Nitesh who worked for civil defence. Nitesh came to her support how any how came to know that the old lady is sick and requires due medical attention and had also lost her memory due to her old age, so he dialed Ambulance No. 108. He was expecting ambulance to reach the spot but came to know that ambulance driver was reluctant to ferry the patient out of fear of Corona infection himself. The ambulance driver bluntly refused to ferry women to the nearest government hospital for rendering health services out of Corona threat. The driver of said ambulance refused to ferry the lady and said he may also be infected from the lady if he carries the lady to the referral hospital as she might be suffering from Corona Virus infection.

When the person from the Civil Defence; Nitesh, gauged the driver of the ambulance who was reluctant to reach the spot to ferry the old lady to the hospital so he understood that there is no any alternate to this situation to ferry the lady to the hospital for her due medical care, except to ask the police. Accordingly he called the local police informed the matter for necessary action on the subject.

The police any how get in touch with the family of this lady at Nehru Nagar. Meanwhile her family was also searching the old lady as she had left her home.

The SHO Vijay Nagar; Nagendra Choubey informed this Correspondent of “A News Of India,, “we received an information  in which an old sick lady is loitering on the back side road of Santosh Medical college and requires immediate medical attention. As soon as we were informed, we taken the matter with due sensitivity and sympathy and rushed a police team there. We also traced the family of the old lady in Nehru Nagar, as she had memory loss and had mistaken to reach the home. We any how, searched her family who were also searching this old lady and we  connected this elderly  lady to her family successfully.”

But, this is a clear cut case of negligence and is a dereliction of duty on the part of ambulance driver who had denied to reach the spot and ferry the old lady to the hospital, who in utter need of medical care.

On the other hand, police worked as a rescue operator and worked in this emergency period of Corona crisis with due sensitivity, sympathy as a true “Corona Warriors”. Actually police came to this lady as an angel and sorted her entire problem as a role model of police.