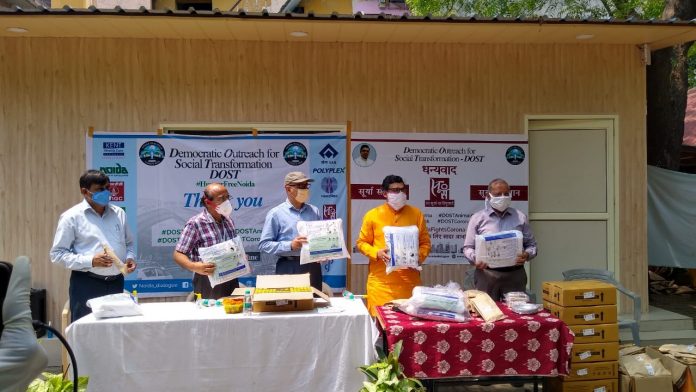 New Delhi: When the country is struggling against Corona, some Corona warriors have taken care of the food of migrant laborers and stray animals in cities like Noida. BJP’s national spokesperson Gopal Krishna Agarwal, through his (DOST) organization, has provided food to millions of hungry people in the city and has managed fodder for dogs and cows roaming on the road. Gopal Krishna Aggarwal started the work of making food by setting up the first community kitchen in Sector 2 on 28 March.

From March 28 till today, Gopal Krishna Agarwal has distributed more than two lakh seven thousand food packets and more than five lakh chapatis free of cost to the needy during the lockdown. He has helped people wherever needed under the campaign Hunger-Free Noida.

Many youths living in Noida and institutions volunteered for this campaign.

BJP national spokesperson Gopal Krishna Aggarwal says, on the call of Prime Minister Narendra Modi, we have established two Annapurna Community Kitchens in Noida which provided food to millions of needy. In addition to two community kitchens under the participatory model, Lotus Boulevard, Parsvnath Srishti, Silvercity, and Omaxe Spa residents also cooked food from their homes which were distributed among Noida. More than five thousand food packets were distributed.

Under Animal Care, his team is also constantly taking care of street dogs and cows. Two hundred dogs from various sectors of Noida are being fed khichdi made from the community kitchens of DOST. Shreeji Gausadan is also making proper arrangements of fodder for cows.

Under the Corona Armor Project, women(including 3 transgenders) working in sewing centers made 1 lakh face masks with the help of sheets collected from various houses. Sheets were sanitized before using it. The masks are then made available to the needy by the district administration and BJP workers. Throughout the several projects, around 63 people were given employment during the lockdown.

Gopal Krishna Agarwal said, during the entire lockdown, a help desk was also established through which people can seek help by calling on a helpline number. So far, more than 350 problems have been solved at the help desk. This includes the need for dry rations, the supply of medicines, and the homecoming of migrant laborers. He said that we are getting the full support of the Gautam Buddha Nagar district administration and Noida Authority.

Special Attendees in the program were Mr. Arun Kumar Singh CDO and Mr. KK Aggarwal Ji (OSD) of Noida Authority. The team of DOST Suraj Sudhakar, Rajeev Venkate, Vaibhav, Sonali Aggarwal, and Madhav worked dedicatedly for this campaign.All institutions and workers were greeted and thanked by DOST Organisation for their respective contributions. No mass public gathering program was organized keeping the lockdown and social distancing in mind.