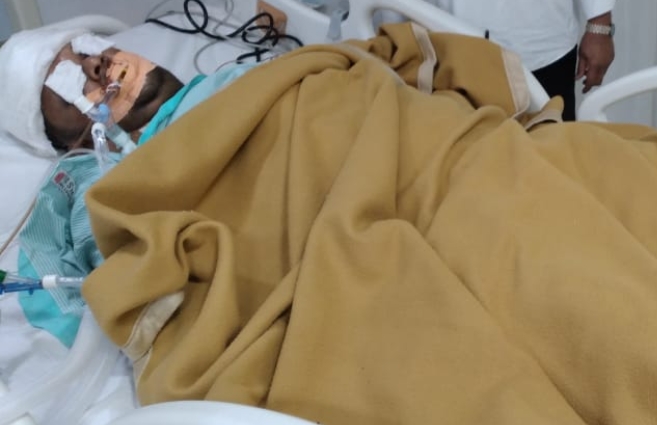 Ghaziabad:   Under Vijay Nagar police station area late on Monday, miscreants shot a journalist namely Vikram Joshi from a very close range when he was going to nearby place on his motor cycle, along with his daughters.  The journalist has been admitted to Yashoda Hospital in Nehru Nagar, where his condition said to be remains critical and is battling for life on ventilator.

At the time of crime committed, the journalist’s two daughters were also with him on the motor cycleand seen the attack and are key witness to thr crime.

After this incident, there is anger in the face of general public on the role of police. As the victim had lodged a complaint against some of the persons who used to harass his niece but police never taken action on the complaint of the victim and kept mum. On the other hand, police inaction gave “extra confidence” among the accused and he taken law in his own hand and attacked the victim out of anger of lodging complaint against himto the police.

Instead of taking action on the complaint lodged by the victim; Vikram Joshi in the present case and in other cases also, is a very common phenomenon in police circle and thereafter major crimes are committed. This case is basically a dereliction of duties by the concerned IO to whom victim’s complaint of this case had been referred. If police official might had taken due action on the complaint in time, this attack might have been averted.

Police inaction is very commonly seen and passive approach of the police warrants larger crime in future and the accused further takes law in his own hand seeing police inaction in most of the cases like this.
The action of police and it’s functioning is also at stake. All concerned police officials and their working must be examined to win the confidence of common people.

The victim; Vikram Joshi, who used to work with a small local weekly newspaper of Ghaziabad had inform the police well in advance through his complaint but police never taken it seriously. All the Journalists of the city has also came out due the attack on his colleague and is questioning the role of police and saying when a journalist is not safe and police never takes action on their complaint what a common people face? All the journalists of the city are openly criticizing police role in the case.
On the other hand, attack on a journalist in a day light situation has became a national news when ex Chief Minister of UP Akhilesh Yadav raised his eyebrow on the worst law and order situation of UP and has openly asked the state authority who are the people behind these attackers who takes law in their own hand, through a twitter on social media.

On the other hand, Priyanka Gandhi Washers who is very active in UP these days has also twitted on the social media platform by saying Ghaziabad is in NCR area where such crimes are being committed hence situation of law and order in other parts of UP can be ascertained.

On Tuesday, the SSP said that a total number of nine accused in this case have been arrested so far. The matter is being investigated further.  On the other hand  Pratap Vihar police choki Incharge  Raghavendra has been suspended with immediate effect.
According to family members, three persons have been named for the murderous attack on Vikram Joshi, working in Jansagar Today, a local weekly.  Some other unknown persons are also involved in the crime.  Those who have been arrested by the police so far are, including; Ravi son Matadin of Mata Colony, Kamaluddin, Amit Kumar, Mohit son of Bhau Devvrat Colony, Veer Singh, Dalveer son of H Block Sector-9  Akash alias Lulli son Shankar Nath of Charan Singh Colony, Yogendra son of Sector-11, Pritam Singh, Abhishek Hakla son of Lal Quarter Thana Sahibabad, Shivakant Saroj, Abhishek Mota son of Mata Colony Mangal Singh and Shakir son Sabir of Charan Singh Colony as alleged by the family of the victim.  Another accused Akash Bihari son of Ashok is also involved in the crime.  Ravi, the main accused in the case, has confessed his crime according to the police. According to family members, a complaint was made with the local police in the case of molestation, but no proper action was taken.  On this basis, the SSP, taking departmental action, has handed over the investigation to the matter as per due jurisdictionl.