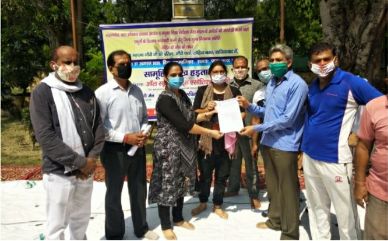 Ghaziabad: While giving his support to the campaign being run by the association under the leadership of Muradnagar Manoj Kumar Sharma ‘Hodia’, in-charge of Subhashwadi Bharatiya Samajwadi Party (Subhas Party) said that in the campaign run by the association under “No school No fee”  During the carona epidemic, it is unfortunate not to be allowed to attend online classes due to non-payment of fees, online education. The founder of Subhas Party, Satendra Yadav said that today the worldwide epidemic like Corona period has weakened the economy of the country due to which millions of people have become unemployed who are not in a position to pay the children’s school fees today.  Subhash Party in which the association is in support of the demand of District Fee Regulatory Committee meeting to take action against the school, as well as Subhash Party is with the association in the “No School No Fees” Campaign being run by the association and Subhas party demands from the rule that  Until the situation is normal and the school fees are not waived till the school is opened.
The support delegation consisted mainly of founder Satendra Yadav, Muradnagar in-charge Manoj Kumar Sharma ‘Hodia’, State Secretary Deepak Sharma, Sandeep Prajapati, Jagdish Goyal, Sunny Kumar etc.