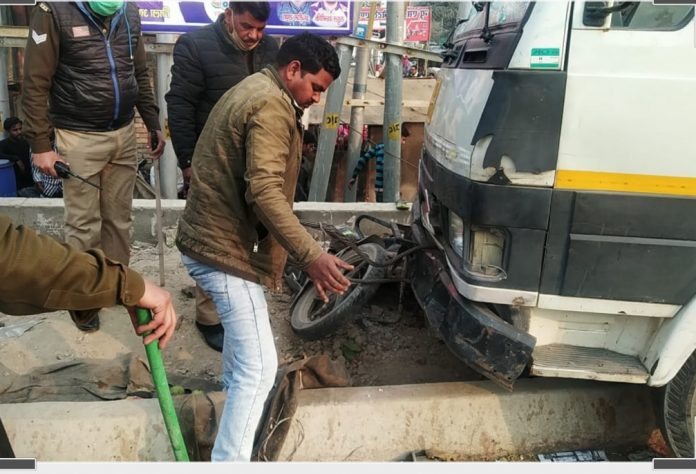 Ghaziabad: There were 3 persons died on the spot and 5 seriously injured on NH 9 near Vijay Nagar in Ghaziabad in a road accident. All the injured were admitted to District Hospital here in Ghaziabad.

The accident occurred in this afternoon wherein, a DCM Toyota crushed the victims who were crossing the highway and the vehicle coming from Delhi met crushed them in this accident.

Infact, NH 24 which has now renamed as NH 9, after it was converted to 14 lane highway connecting Delhi to Meerut which was developed by National Highway Authority of India(NHAI) last year, is seeing heavy traffic and speedy traffic movement on this highway now.

The crossing where accident reported, is an important crossing under Vijay Nagar police station connecting Vijay Nagar to Bagu and person coming from Noida to Vijay Nagar & Pratap Vihar, a densely populated area. As there is no foot over bridge to cross the highway and the underpass made by NHAI is far away from the crossing, so, it is very difficult for pedestrians to move so long resulting people crossing the highway at the crossing itself and often pedestrians met with such accidents.  Similar accidents happened in past also  because after the development of NH 9 to 14 lane highway speed of all vehicles moving n this highway are almost touching between 60 to 80 km per hour and, on the other hand, people awaiting to catch auto rickshaw on the said crossing and or crossing the highway to go one side to other side are most vulnerable to such accidents, as most of the time they are in hurry crossing highway and, on the other hand speeding vehicle mostly warrant such kind of accident due to high speed, which is very common at this point, atleast.  Similar situation is there at sector 62 crossing where pedestrians crossing the to other side of highway; NH 9 to catch auto rickshaw or bus to reach their destination.