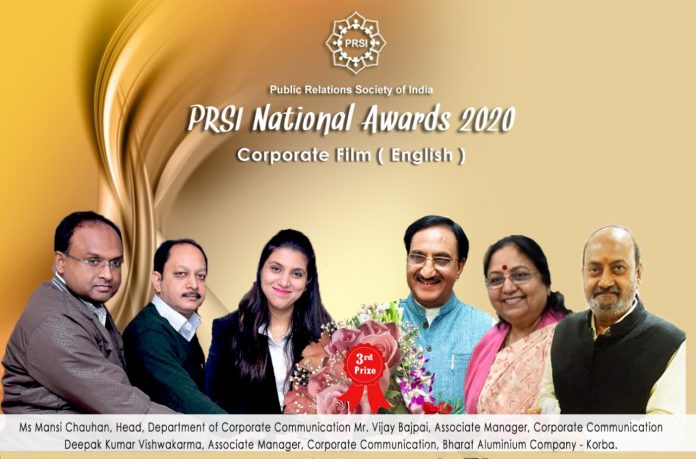 The film highlighted BALCO’s dedicated efforts in COVID prevention measures in the state of Chhattisgarh as a flag bearer. BALCO took extreme precaution and covered the sanitization measures in the red zones of the nearby districts supporting the communities and standing by them. The film was conceptualized to spread awareness of all the safety measures implemented inside the plant premises and in nearby vicinity by the management.

Mr. Abhijit Pati, CEO & Director, BALCO, expressed happiness over receiving the accolade and said, “BALCO has always spread awareness and ensured everyone’s safety even during the most challenging times of the pandemic. The video highlights the efforts and dedication of all the individuals involved in implementing and maintaining safety and precaution measures in and around BALCO. At BALCO, we work with our partners and stakeholders towards socio-economic prosperity of our country. As we leverage digital technologies and innovation in our operations, we also continuously work with the peripheral community, helping them sustain through trying times”

BALCO plant executed its operations ensuring adherence to all COVID-19 guidelines issued by the central and state authorities. The organization has marshalled its resources to employ preventive measures for its employees, business associates and communities at large in, around and far beyond its plant area. BALCO has also been proactive in executing all the preventive measures to fight the pandemic and ensuring the safety of the workforce. It is the first organization in Chhattisgarh to have pre–medical and periodic medical examination of all the employees as well as business partners in BALCO hospital as per the statutory requirements.

Bharat Aluminium Company Limited (BALCO) is India’s iconic aluminium producer. It is owned 49% by the Government of India and 51% by Vedanta Limited. Vedanta Limited is the world’s 6th largest diversified natural resources company and the largest producer of aluminium in India. BALCO operates a 0.57 million tonne per annum aluminium smelter in Korba, Chhattisgarh. It is also a leader in value-added aluminium products that find critical applications in core industries. With its world-class smelter and power plants, the company fulfills its mission of spurring emerging applications of aluminium as the ‘Metal of the Future’ for a greener tomorrow.
tomorro