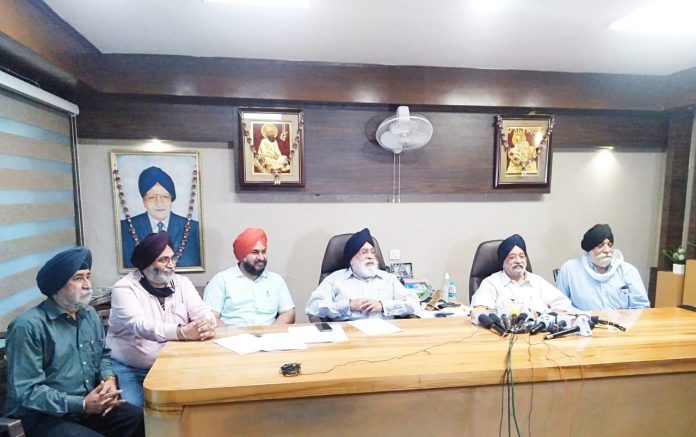 NEW DELHI– Trouble compounded for Badal loyalist MS Sirsa for allowing vulgar songs and dancing routines on the sacred compound of Sri Rakab Ganj Sahib as the SADD pledged mass agitation if the outgoing DSGMC president failed to seek Panthak forgiveness and move the makeshift Covid centre out of the historical gurdwara.

Sirsa, whose religious credentials on the Panthak scale have been a matter of serious concern in the community circles, is no stranger to inviting severe criticism.

“Why he does what he does?” wondered SADD chief Paramjit Singh Sarna at a news conference. “What ideology does he actually espouse? Last year, he proposed to cut a cake at the same Rakab Ganj Sahib to celebrate the birthday of Florence Nightingale. Under his watch, couples were seen celebrating Karva Chauth at Sri Bangla Sahib. Under his watch, Guru Sahiban were paraded as idols in Nagar Kirtans. He then sent Sri Guru Harkrishan Patshah to quarantine when every Sikh remembers Nanak VIII as the healer of physical and spiritual distress – ‘Sri Harkrishan Dhiyaaiyee Jis Diththe Sab Dukh Jaaye’.”

The SADD chief recalled how Sirsa sought to belittle the towering stature of Chaar Sahibzadey by proposing to commemorate their martyrdom as Children’s Day. “Under whose behest he sought to project Chaar Sahibzadey as ‘baal’, or kids, when the humanity addresses them as ‘Babas’ for their sublime martyrdom?”

The SADD president recalled how pro-Panthak groups issued fervent appeals to Sirsa not to throw open the estate of a historical gurdwara in the heart of the national capital to something as dangerous as Covid-19.

“Every Panthak individual and group was worried that a Covid centre at a historical gurdwara would not only pose huge risks to the staff working there but could also cause grave violations of Panthak Maryada. And the worst happened,” Sardar Sarna noted. “Not only the patients, visiting doctors and nurses were doing hair-cuts and other forbidden activities like smoking stealthily, they eventually trampled on the inviolable sacredness of the site by singing vulgar songs like ‘Badan Pe Sitare Lapete Hue’. A place where the bani of Sri Guru Granth Sahib is expected to ring through to sooth hurt souls and bodies, the same sacred site shook with dance routines and vulgar songs blaring on microphones. When Sirsa green-lighted this very act of sacrilege at Sri Rakab Ganj Sahib, he actually dwarfed Massa Rangan in the pages of Sikh history.”

In yet another prophetic warning, Sardar Sarna cautioned Guru Panth not to get swayed by the Badal stooge’s theatre in the name of sewa on TV and social sites.

“He has inflicted heavy damage on the concept of Sangat and Pangat by wheeling Guru ka Langar out of gurdwaras. He has immensely damaged the concept of Daswandh by wheeling out critical medical supplies out of DSGMC inventories to the political constituencies of the Badals. He accepted money from the likes of Amitabh Bachchan and acknowledged its receipt, that too partly, only after the actor began blowing the lid off the so-called charity.”

Sirsa, Sardar Sarna, warned represents mafiasation of “sewa”. “Have you ever seen a dialysis facility offering something as critical as dialysis without basic physical examinations? This is what is happening at the dialysis centre he presides over at Sri Bala Sahib. Time is not far when Sirsa would stand accused of grave medical negligence and bring huge disrepute to Sikh sewa that the community did worldwide during the pandemic.”

The SADD leader cautioned that the outgoing DSGMC president was working on a readymade script aimed at destroying Sikh reputation, Maryada and basic tenets of the faith.

“If he doesn’t seek Panthak forgiveness for allowing dancing and singing at Sri Rakab Ganj Sahib, he better prepare himself to face a mass Panthak agitation. We mean it when we say it,” Sardar Sarna said.