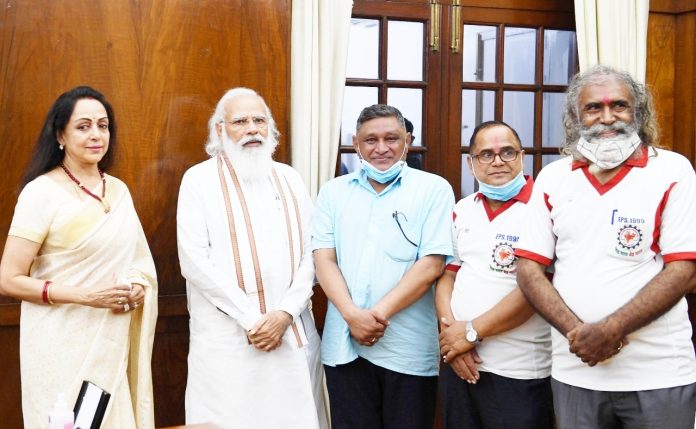 Referring to the untoward and dying condition of EPS 95 pensioners, Commander Shri Ashok Raut expressed concern over the increasing deaths of the pensioners and demanded for an announcement on 15 August 2021 to approve the demands of the pensioners. There is a demand of the organization that the continuous fast for the last 956 days in Buldhana, Maharashtra, the headquarters of NAC, should also end.
It is worth mentioning that EPS 95 has been agitating continuously at various forums for its demands. The demands of the pensioners is that they should be given minimum pension of Rs 7500 and dearness allowance. According to EPFO’s letter dated 23.03.2017 * the facility of option of higher pension on actual salary as well as medical facility and others * is also valid. There is a demand for Inclusion of non-EPS95 retired employees in the scheme will be. The main demands of 5000 monthly pension etc. should be approved in this Monsoon Session of Parliament.
MP of Mathura Smt Hema Malini supported the demands of NAC before the Prime Minister and presented the view of EPS 95 pensioners and requested to accept the demands of the pensioners.
The Prime Minister said that, “we have discussed this subject with the NAC delegation earlier also. The process of solving the problems takes some time but you people do not get upset.”
Saying this he directed the Minister of State Shri Jitendra Singh to discuss this matter in detail with the delegation.
According to the instructions of Prime Minister, Dr. Jitendra Singh ji heard the arguments and facts of the delegation in the presence of Smt. Hema Malini ji. After this, a meeting of the delegation was organized by Finance Minister Nirmala Sitharman.
In the presence of Dr. Jitendra Singh and Smt. Hema Malini, NAC National President requested the Finance Minister that . how would the pensioners survive in such a low pension amount? Referring to this, Commander Ashok Raut said, “Our four-point demands should be fulfilled soon. EPFO has sufficient funds but still the way other. The government has increased its contribution in the schemes, in the same way, the government should increase its contribution in the EPS 95 pension scheme and keep it safe while respecting the old EPS 95 pensioners of the country.
The Finance Minister listened very carefully to the delegation.
In this meeting, the National General Secretary of the organization Shri Virendra Singh Rajawat and National Chief Advisor Shri Dr. PN Patil were also present in the delegation of NAC.