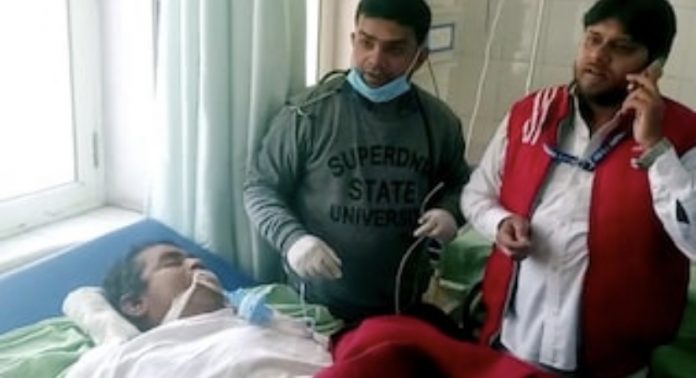 Diamond Yadav/ Sr. Correspondent
Moradabad: A shocking incident was witnessed in Moradabad, UP, where the police was informed about the death of a person injured in a road accident. After that the police reached Morchuri of the district hospital to do the Panchnama of the dead body. The police was looking at the injury marks on the dead person’s body, only then realized that the dead person was breathing.

In fact, at around 11 am on Friday, there was chaos in the mortuary built in the district hospital when after 7 hours a person kept in the mortuary started breathing.Man found alive after 7
According to the relatives, the residents of Majhola police station area are employees in Shrikesh Municipal Corporation. Late in the night, when he went out to get milk from the house, an accident happened with Shrikesh while on the road. When the relatives got this information, one after the other three private hospitals were taken for treatment but Shrikesh was declared dead.

The person declared dead was breathing

On Friday morning, when the police were preparing to perform the Panchnama of the dead body, it was only then that it was realized that this dead person was breathing. The family members present there immediately gave this information to the doctor in the district hospital. On information, the doctor who reached Morchuri, after checking up and confirming that the person was alive, immediately admitted him to the district hospital for treatment and started his treatment.