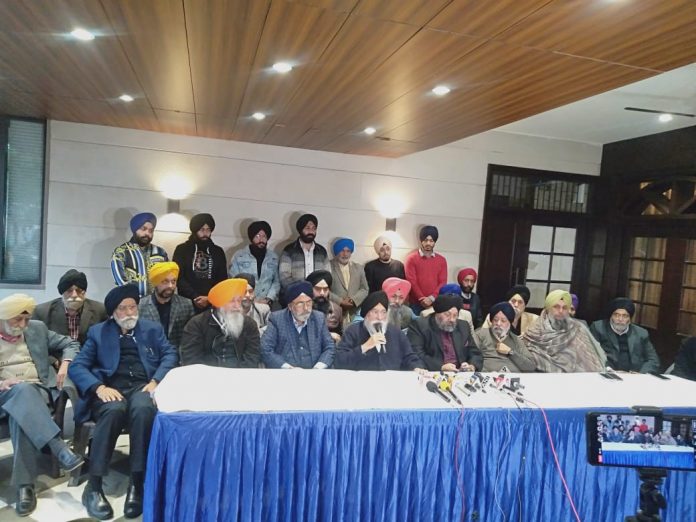 NEW DELHI — With police in riot gear barging into the sacred precincts of Sri Rakab Ganj Sahib and then straight into the voting hall housing Sri Guru Granth Sahib, the Badals have committed yet another act of sacrilege, this time to grab the DSGMC fraudulently, the SADD declared.

Facing a certain defeat in the DSGMC executive elections if the process was carried out per law, the Badals plotted use of police force to wrest Delhi’s gurdwara administration, SADD chief Paramjit Singh Sarna told a news conference Sunday.

“Worse, this dirty plot was executed by none other than SGPC president Harjinder Singh Dhami, who led the charge in inviting police right into the gurdwara hall with Sri Guru Granth Sahib present,” the Panthak leader said.

In a bizarre act of sacrilege, police were then seen manhandling all elected Panthak members and throwing them out of the gurdwara hall, in the presence of Sri Guru Granth Sahib, in order to allow Dhami and a handful of other Badal loyalists to rig the DSGMC executive voting, the SADD president explained.

“Even a slight violation of maryada in the presence of Sri Guru Granth Sahib is deemed beadbi. But here none other than the chief of the SGPC was seen taking the lead to formally let an entire police force gate crash a gurdwara hall and go no-holds-barred inside,” Sarna thundered. “Sacrilege is now in the DNA of every Badal stooge. From their street-side thugs worshiping the Sauda Saadh to the president of the SGPC. They just want to grab power by hook or by crook. For them, Sri Guru Granth Sahib holds no esteem.”

Before the worst was committed, fraud began to unfold when Badal loyalist Sukhbir Singh Kalra made a public show of what was supposed to be a secret ballot, the SADD chief said.

“All of us, including JAGO’s Manjit Singh GK, raised our serious objections and demanded that vote be declared invalid. To our shock and surprise, Dhami and pro-term chairman Gurdev Singh, another Badal loyalist, sought to defend that violation with frivolous arguments in the presence of Sri Guru Granth Sahib,” Sarna recounted.

Attempts were also made to do away with the secret-ballot process altogether, all indicative of a massive plan to rig elections in favour of the Badals.

“Finally, they used the trump card and invited police which used force to evict Panthak members and let the Badals do whatever they could to manipulate elections in their favour,” Sarna said.

The SADD, however, pledged not to take the sacrilege and the election scam hands down.

“We will challenge this massive poll fraud and sacrilege both in the court of law and in the court of Guru ki Sangat,” Sarna said. “Our teams of legal luminaries are already on the job. And we will launch a massive drive about the Badals’ new act of beadbi across every street of Punjab and Delhi soonest.”