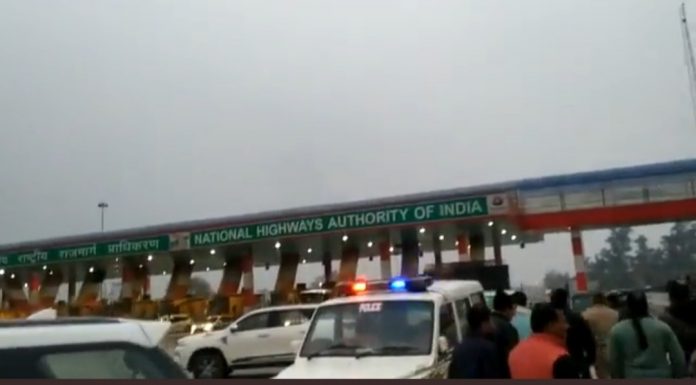 Ghaziabad: About half dozen suspected unidentified persons opened many rounds firing at the carvan of Asaduddin Owaisi, the chief of AIMIM on Thursday evening. No causality or gun injury is reported in the attack. It is claimed to arrest one of the attackers, said a senior police officer.

The incident took place at National Highway-9 (earlier known as NH-24) near Chhijarsi Toll Plaza. Owaisi, the chief of AIMIM was returning Delhi from Meerut in the evening on Thursday. There were many four wheelers vehicles in his caravan.

The eyewitnesses claimed when the carvan was passing through National Highway-9 near Chhijarsi Plaza Toll Tax, some unidentified armed persons opened 4-6 rounds firing aiming the carvan. Seeing the firing attack, Owaisi and his followers were frightened and police were called immediately on spot. One of the attackers was caught from there while he was trying to flee after firing.
The senior police officers of Ghaziabad and Hapur districts reached on spot with force. However the incident took place under the jurisdiction of Pilkhuwa Police Station of Hapur district.

Owaisi has been sent safe to his Delhi’s residence by another vehicle in police protection, said police. The police are talking all necessary actions in the issue.