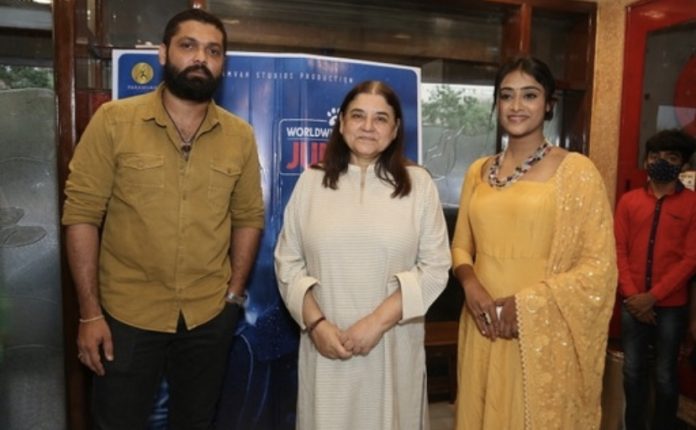 777 Charlie releasing on 10th June, the makers are leaving no stone unturned to ensure it garners support from all quarters. The film has been going places with the advance screenings that started few days ago all across country. The reactions from the screening till now is overwhelming and a screening in Delhi turned out to be a happy one for the makers when the heartfelt film revolving around a dog found a receptive audience in Maneka Gandhi, the animal rights activist and a BJP leader.

Mrs Gandhi watched the film yesterday with few of her team members and everyone came out very moved by this little big film.

Rakshit who plays the lead in the film and was present at the screening with co star Sangeetha Sringeri says, “You make a film for audiences and there is no better reward than people liking the film and connecting with it so beautifully. We were pleasant surprised when Maneka ma’am’s agreed to come and watch the film. Knowing her love for animals, her opinion on the film was important.”

The film about a beautiful bond between a man and a dog is directed by debutant Kiranraj K and produced by Rakshit Shetty (under his banner Paramvah Studios) and G S Gupta.

It was the heartwarming content that got many renowned names associated with the film. UFO is releasing the Hindi version of the film, while actor Prithviraj Sukumaran, Director Karthik Subbaraj and actor Rana Daggubati, will release the film in Malayalam, Tamil and Telugu respectively. The film’s trailer was appreciated by actors like Dhanush and Sai Pallavi.