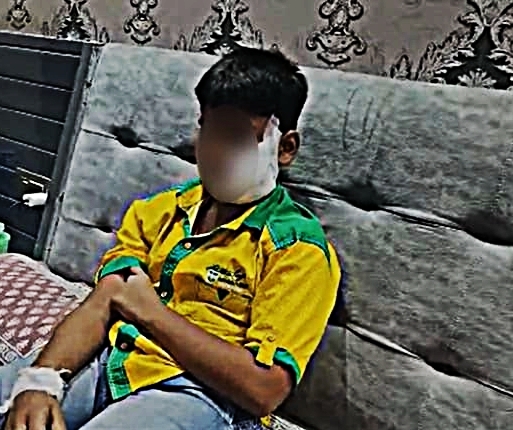 Ghaziabad: Pushp Tyagi, an 11-year-old child, resident of Sector- 23 Sanjay Nagar under police station Madhuban Bapudham area, was fatally attacked by a dog of Pitbull breed on Thursday evening here. The dog bled badly by biting on his face. The boy received about 150 stitches on his face.

A person named Subhash Tyagi, who lives in Sector 23 of Thana Madhuban Bapudham area, has raised a dog of Pitbull breed. Which is considered extremely dangerous. Today, when Subhash Tyagi’s children were walking this dog in the park, during this time the dog broke on about 11-year-old Pushp Tyagi playing in the park and attacked him with his life. This incident was captured in the CCTV camera. The people present in the park tried to save the child but no one could muster the courage to approach the dangerous dog.

After a lot of effort, somehow people rescued the child from the dog’s clutches. The child inflicted large wounds on his face. The child was rushed to the hospital where about 150 stitches had to be made on his face to fill the wounds of the child.

As soon as the information of this incident was received, the municipal team reached the spot and imposed a fine of 5000 on the owner of the dog for keeping the dog without registration. On the other hand, the family members of the child also talked about taking legal action against the dog owner.