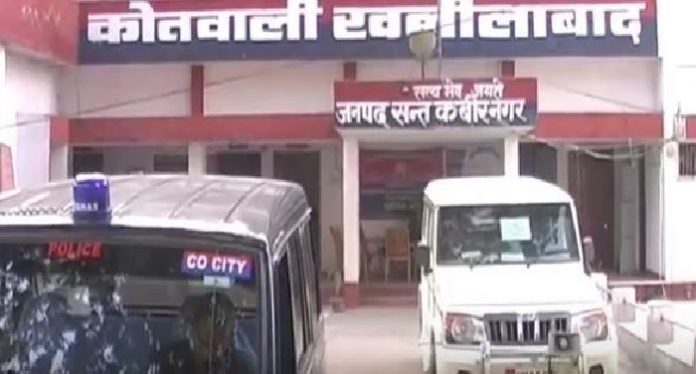 Sant Kabir Nagar: On November 27, there was a corpse of father and son in Khalilabad area. For the unveiling of the incident, a joint team of police station superintendent of police, surveillance team and SWAT team was constituted under the guidance of Superintendent of Police Sant Kabirnagar Mr. Akash Tomar and under the supervision of Additional Superintendent of Police, Mr. Asit Shrivastav, under the leadership of Khalilabad Mr. Ramesh Kumar, District Officer and self-continuing. Directing the teams, with the successful unveiling of the event in just 48 hours, all Received success in arresting the accused.

Accused in the incident 1. Nagendra Son Sw. Komal 2. Motilil 3. Nandkishor alias Chattu 4. Pramod Songan Nagendra 5. Prema Chaudhary Wife of Bahadur resident of Gram Ahirauli Police Station Khalilabad Sant Kabbirnagar. Arrested Accused said that the murder was carried out due to mutual rivalry. On the trail of the accused, the deceased Omprakash Pandey’s helmet and other items used in the murder have been recovered by the police. Praising the joint team by the Superintendent of Police Sant Kobirnagar on the immediate unveiling of this sensational incident has been announced.