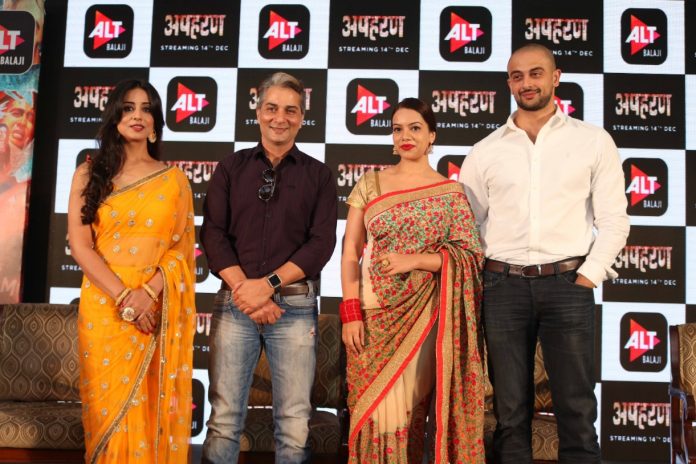 New Delhi: ALTBalaji, known for their captivating content library, is all set to entice the viewers with its new offering ‘Apharan’. In a high-octane event in Delhi today, the stellar star cast – Mahie Gill, Arunodoy Singh, Varun Badola and Nidhi Sigh unveiled the trailer of the series.The short glimpse is a perfect mix of riveting storyline, stellar cast and edge of the seat entertainment.

‘Apharan’ has created a sense of excitement among viewers right from the time it was announced followed by a series of innovative digital promotions. Audiences went into a tizzy when their favourite TV stars like Divyanka Tripathi, Ekta Kapoor, Hina Khan, Vivek Dahiya, etc. put up posts on Instagram with a blank slate and a message – ‘Mera Apharan Ho Gaya’. The posts on the social platforms built both curiosity around the show’s concept and higher engagement amongst fans, right before the launch of the trailer.

The first glimpse of the highly-anticipated thriller enthralled the audience with its 70’s style masala entertainment.

Speaking on playing the role of a cop, the talented Arunoday Singh quipped, “I am glad to have got the opportunity to play the role of a cop again in my career. I loved essaying this rustic character and to be honest I had to really work hard to grasp the Hindi dialect. Apharan has an extremely intriguing strong storyline and spicing it up further is its pacy narrative. I am overwhelmed by the kind of response we have got for the trailer from the Delhiites. I delighted to be here and I am hoping that the audience likes our web-series as much as we loved making it.”

Playing a pivotal role in the series, the gorgeous Mahie Gill said, “ALTBalaji is known for its cutting edge content and I am happy to be a part of Apharan. It has a fantastic storyline and I feel each of us has really delivered to best of our potential. Delhi has always been special for me from the day I have entered the entertainment industry and I am glad to have received so much love and affection from the people here. I am sure people will appreciate the honest efforts we have put in Apharan.”

Varun Badola, the most celebrated actor of the television industry, not only plays an important role in the web-series but has also turned a writer for the same. Expressing his joy over the response received on the trailer, he said, “Apharan is a fantastic concept; one that I have very passionately penned down. The thriller will keep you hooked throughout and has these epic hilarious one-liners in the most unexpected situations. Really looking forward to the audience’s response to this web-series.”

Talking about her first association with ALTBalaji, actor Nidhi Singh, said. “I have grown up watching Ekta Kapoor’s shows and films and it was my dream come true to be part of an ALTBalaji series. When I heard the script for the first time, I couldn’t leave the narration even for a minute. It was an instant yes for me. I am sure people in Delhi and rest of the country will definitely enjoy watching Apharan.”

Apharan is a story of a celebrated cop, who lands himself in a situation where he is desperate not only for money, but to fight for his one true love, his wife. In this fight for survival, he has tonavigate his waythrough a kidnapping which evolves into an unknowing murder. The series takes a turn when he has to investigate his own crime, trying to get out of the web of lies.

Build over 12 spellbinding and engaging episodes, the web-series will surely take your breath away with its screenplay, direction and the apt amount of humour