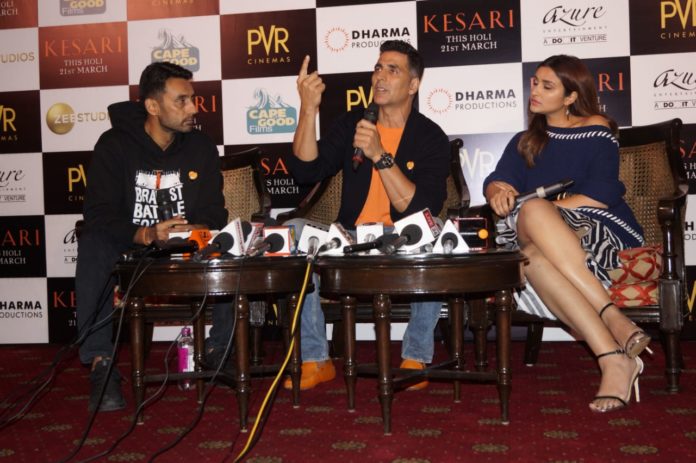 New Delhi: Akshay Kumar and Parineeti Chopra came to promote their upcoming movie ‘Kesari’ in Delhi. The press conference was held at PVR Plaza, Connaught Place, Delhi. Director and Writer Anurag Singh was also present at the press conference. The movie is produced by Dharma Productions.

Kesari is an upcoming action-war based on a story of Havildar Ishar Singh who participates in the Battle of Saragarhi in which an army of 21 Sikhs fought against 10,000 Afghans in 1897.

Present at the event Akshay Kumar told about his preparations and role in the movie, “I didn’t have to do many preparations for the movie as our director, Anurag was very supportive in throughout the journey. But when it comes to carrying the Pag (turban) I am wearing in the movie and emotional aspect of the movie it was difficult for me. The Saragarhi battle is nowhere is our syllabus but it is one of the bravest battles ever fought in Indian history and it must be told worldwide. This movie will definitely tell its story and reach out to the hearts of the people.”

Parineeti spoke about the fun she had working with Akshay while shooting for Kesari, “Akshay Sir is an amazing person and he is full of energy. He always used to do pranks on me on the sets. I had fun shooting the song in the movie. I am playing his wife’s role in the movie which is a very light role. I didn’t have to do many preparations for this role as our director was very supportive each day on the sets, so I just had to approach him every day and he made me understood all the work .”

Director Anurag Singh told about his directorial passion, “For me story is the most important part of the movie. It should touch the heart of the director only then you will be able to invest one or two years of your life to the script.”