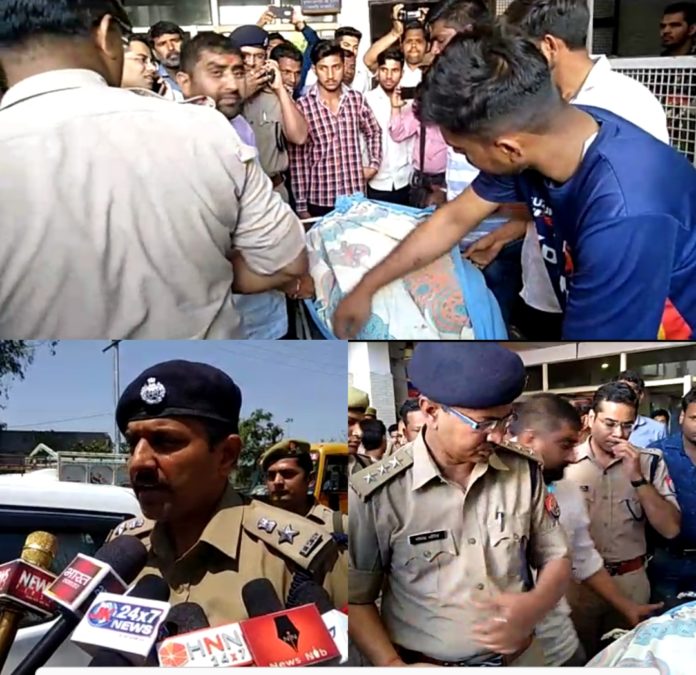 @Pramod Sharma
Meerut: In a one sided affair a boy killed his alleged girlfriend who was not responding him. This strange news is from Meerut in which a girl shot dead in Ganga Nagar area  in one sided love story.

Initially, the reason behing murdering of girl is being considered as failure in love and in out of rage the boy opened fire on the girl and bullet pelted into her head and the girl in question died.

The killer who used to love the girl one sided as alleged by neighbour. But the girlfriend did not love him and never responded the boy and this was the reason why the boy was angry with the girl. On the other hand, recently the girl marriage was fixed and she was engaged some where else. When the boy got the message of his engagement, he could not control his anger and out of rage he shot his girlfriend with bullet.

During enquiry it came to notice that the boy loved his alleged girlfriend very much, but she never responded in the same spirit and the love was one sided. After Knowing this he became very angry and shot her.

Actually, the case is reported from Ganga Nagar area of ​​C Block, where a young man named Deepak lives. The girl was also living in the the same neighborhood.  On many occasions, he did not understand even after the opposition, the family of the deceased, when the accused got upset after hearing news of her engagement elsewhere. As  her marriage was fixed somewhere else, on being  angry the accused reached the house of his girlfriend with gun and opened fire.  During firing,  bullet hit the girl’s head and she died on the spot. In this firing her sister also received a bullet in her leg and also injured. She was admitted to the hospital where her condition remained serious.
SSP Meerut Nitin Tiwari   arrived at the spot and inquired about this case, the accused Deepak is the son of a soldier who remains in the neighborhood of the deceased. At present, the police has taken possession of the body and sent it to the post-mortem and accused was arrested by the police.