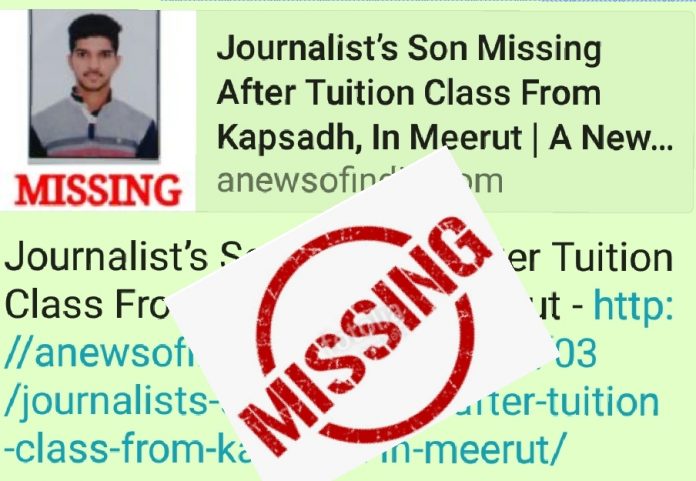 Meerut: No clue of journalist’s missing son Tarun who is missing right from 2nd October,2019 after attending tuition class in Kapsadh under Kankarkheda police station.

After lodging FIR police investigation could not search the boy nor could collect any clue on the issue which can lead to search the boy and take any action in this case.

According to Pramod, father of the missing boy ; a sr. Journalist by profession when he spoken to “A News Of India” , ” There is no effective police action in the case resulting police is unable to trace my son nor any crucial evidence or fact police could reach which can lead to though some lights on whereabout of my son. If an effective action would have taken by police my son could have been found or atleast crucial evidence on the matter could have been find resulting in atleast his whereabouts was known. Police is sitting idle. If any things goes wrong about my son police should be fixed responsibilities and action thereof must initiated against them.”

On the other hand, police claims we they are worki g hard on the matter but still we are clueless.
“No clue has been found yet on the matter, but still, we are doing our best, a new case has come to light that a girl is also missing together whose report has been filed,” said Vijendra Rana, Incharge, Police station Kankarkheda during briefing to “A News Of India”

Let us describe you that  a 16 years old son of an electronic media journalist was missing from Kapsadh after attending tuition class and there is no clue of the boy in question even after 5 days of his missing.

The boy; Tarun Kumar a class 12th student of J P School in Meerut had gone to attend tuition classes in a nearby area under police station Kankarkheda but did not return home thereafter. The father of the missing boy has lodged an FIR in this regard on 3rd Oct,2019 in the Kankarkheda police station.