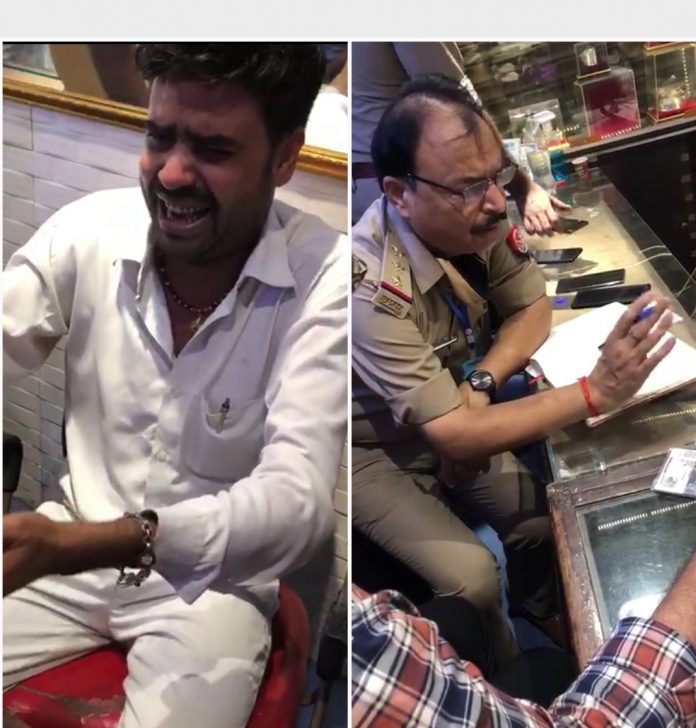 Ghaziabad 29th September2020
In Ghaziabad at Indirapuram, miscreants have robbed Gold, diamond and silver worth more than 10 lac from a jewellery shop in broad day sun light challenging Ghaziabad police. This robbery has revealed the  facts of law and order situation in this NCR city.

The crooks succeeded in their fearless plans, in which about half a dozen crooks targeted a jewelery shop located in the Nyaya Khand Colony under police station; Indirapuram area and about Rs 10 lakh jewelkery looted and the was executed without fear of Ghaziabad police.

The great thing is that the crooks took the DVR of the CCTV camera installed there in the jewellery shop as well in order to destroy any evidence of robbery which also reveals high level planning.

The information was given to the local police.  On the basis of information, the police reached the spot and are looking for miscreants.  The victim jeweller stared crying bitterly as soon as the police arrived at his shop and when he informed the police about the whole incident, expressing his pain.

Giving information about the entire case, the SP City Abhishek Kumar said, “the police had received information from the owner of Durga Jewellers located in Gyan Khand that some miscreants had committed robbery at the jewellery shop on the strength of arms.  As soon as the information was received, he himself reached the spot with the police force and took stock of the situation, it was found out that the DVR of the CCTV camera installed there was also taken with the crook and he was told that on the strength of the arms. The owner of the shop was also present at the jewellery shop  at the time of incident. The Robbers have robbed Jewellery from the shop worth about Rs 10 lac. The police started investigating the incident.”