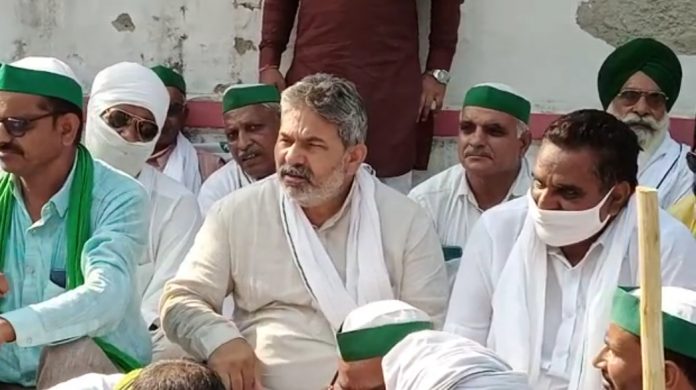 Moradabad: Farmers’ organizations of the region, reached Moradabad today and gheraod Commissioner’s office and sat on dharna. This resulted in closing the gate of the Commissioner’s office as the farmers sat there on the dharna numbering in more than hundreds of farmers, led by Rakesh Tikait, the national president of the Indian Farmers Union.

Since the passing of the three bills of Agriculture benefitting indian farmers as claimed by central government in Parliament however, there was a strong opposition to the these agricultural bills by the opposition, due to which, even today, farmers’ organizations in many states including Punjab are protesting against these bills. In the same sequence today, the Indian Farmers Union in Moradabad and  Hundreds of farmers belonging to other organizations today sat around the commissioner’s office on a dharna. Due to this dharna, a part of the city was also got blocked and the farmers who reached the middle of the city on the tractor s, trolleys etc. these farmers started reaching right from 11 am to this decided  dharna  place by Rakesh Tikait, the national president of the Bharatiya Kisan Union, who was taking the lead. Tikait, who was present at the picket site, conveyed his message to the government through media,  “the government must also give the guarantee of MSP in writing, and whatever rules are implemented in the agricultural bills.”
They have seen as these bills as anti-farmers, if this situation remains, then after two years, the mandis will be finished. The central government should give everything in writing, because no work is done in oral, if the government asks for them  If we do not agree then this picket demonstration will go on like this, said Rakesh Tikait.