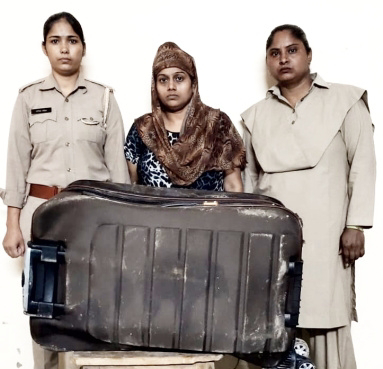 Ghaziabad: A woman murdered her lover by slitting his throat with a razor in Ghaziabad, Uttar Pradesh. She was going to hide the lover’s body by placing it in a suitcase, but she was caught by the police before she could managed it. Ghaziabad Police has arrested the lady for killing her lover.

This sensational case is. taken under Teelamod police station of Ghaziabad. Police team of Tila Mor, while patrolling in the night on Sunday night, a woman was seen dragging a heavy trolley bag and carrying it.

Seeing the police, she panicked and tried to hide by going to the side of the road. The police became suspicious of the woman’s movement. When the police questioned her, she could not tell anything about the luggage in the bag. When the bag was opened , the body of a man was found in it. The police caught the woman and brought her to the police station.

During interrogation at the police station, the woman revealed her name as Preeti Sharma, wife Deepak Yadav, resident of Tulsi Niketan. She told that the body in the trolley bag is of her live-in-relation partner Firoz, a resident of Sambhal. She was living in a live-in relationship with Firoz for the last four years, after leaving her husband Deepak. Preeti was insisting Firoz to marry, but he was not ready to get marry with her.

There was an altercation between the two on the night of 6 August regarding this matter. Firoz told her that she had not been loyal to her husband, how can trust her to be loyal to him. Firoz had called Preeti as a characterless woman and he deny to marry her. Hearing such words of Firoz, Preeti got so angry that she killed Firoz by slitting her throat with a razor. Firoz used to work as a barber in Delhi.

After killing Firoz, she had bought a trolley bag from Seelampur, Delhi to dispose of the dead body of Firoz. So that she could escape by keeping her body in the train, but her planning to escape failed when she was arrested by the police with Firoz’s body.