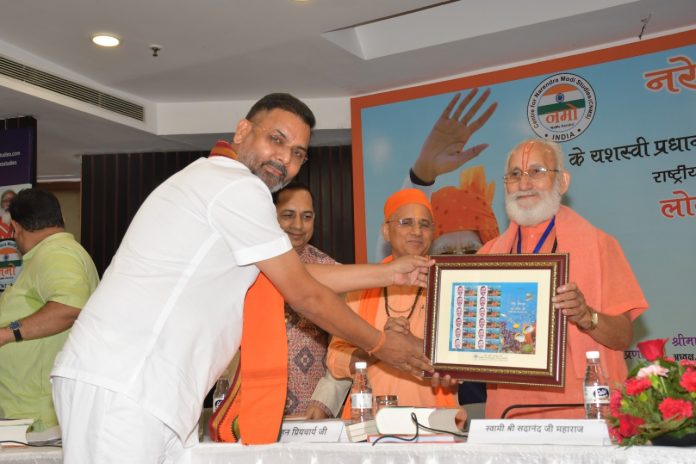 New Delhi: Celebrating the birthday of legendary and visionary leader Prime Minister Narendra Modi , renowned social worker and entrepreneur Sanjay Sherpuria today that Narendra Modi has given the freedom to the nation in a true sense after 75 years of independence. At the same time, citing his experience of 30 years in Gujarat, he said that the Prime Minister has emerged as a great visionary leader of India who not only brought revolutionary changes in the country but also placed the nation among the top countries in the world.

Sherpuria was the addressing a function orgainsed by the Narendra Modi Study Centre which popularises Modinomics. The Centre is celebrating the Prime Minister’s birthday as Public Service and Nation-building Day.

Addressing the national seminar, book release and prize distribution ceremony organized at the India International Center on the birthday of the Prime Minister, Sanjay Sherpuria said that as Lord Krishna killed Asuras along with his maternal uncle Kansa, in the same way, Modi eliminated crimes in the country. He has put an end to many evils like robbery, theft, dishonesty, treason and bribery. Modi has emerged as a great crusader by destroying nepotism and Pariwarvaad and restoring Dharma, Peace, Truth, and Harmony.

Sanjay Sherpuria said that for years after independence, one rupee was released from the government for help and only 18 paise reached the farmers, poor and women and youth. After 2014, when one rupee is released from the government, 100 per cent is directly deposited in the bank account of women, farmers, the poor and youth. This is a wonderful accomplishment for the nation, which has been established by Pradhan Sevak Narendra Modi.

He said that whether we talk about the concept of building a new India or the goal of a self-reliant India, we focus on being a world leader in terms of service and security with humanity, peace and prosperity as per Indian philosophy. All these goals can be realized only when the citizens of the country are fully serious and aware of their rights as well as their constitutional duties. It is essential for nation-building and its development.

With regard to the identity and goal of the new India, the winds of change are blowing in the 8 years of Prime Minister Narendra Modi and his government and India has got a new identity.

Corruption has been effectively curbed, a strong message has been given to the enemies of the country that a befitting reply will be given to those who dare. The economy has been strengthened. People’s confidence in government institutions has returned. India’s prestige has increased on the world stage. India’s global ranking has improved. Today the leadership of the country is putting all its strength and potential into the security of India, economic progress, youth development, and happiness of farmers and betterment of life of crores of poor citizens of India.

Wishing the Prime Minister a long life, Sherpuria said that the Mod-led government is engaged in fulfilling the aspirations of the people for the last eight years. PCC, which means Perception, Communication and Connection, is behind the success of PM Modi. There are such unique things in Prime Minister Modi that have raised his political stature to a great extent. People’s trust in the Prime Minister has increased because he communicates directly with the people in his own language and this connection with the people gives him success.

Sherpuria said that under the leadership of Modi ji, the citizens of India are today seeing their country emerging with a new hope and confidence. Today there are dreams and so are the resolve and efforts that make dreams come true. This journey of development under the leadership of Modi ji is trying to give India respect, respect and a new identity in the whole world, where governance means service and dedication.