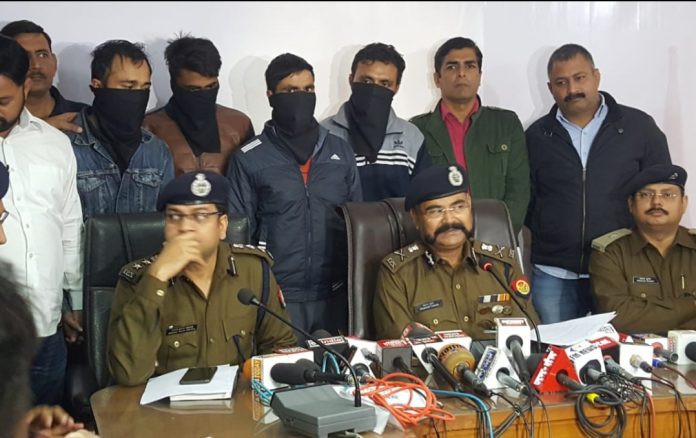 Ghaziabad: The Sahibabad Police have claimed to arrest four dacoits in the connection of dacoity worth one crore on Prem Shri Jewellers Sahibabad taken place on 14 November.One of their accomplice is absconding.

The police recovered two pistols, two country made pistols with cartridges and two bikes used in crime from the possession of arrested. For thisThe ADG has announced to 50 thousand rupees cash award to police team

The ADG told the media persons here that the gang leader Arush had been sent jail earlier for loot and he had six loot cases against him. Arush alias Arshi and Mahendra Kumar Pandey had met in Dasna jail and after bail out from jail, both of them had resided in Kaushal puri, Azadpur Mandi Delhi in a rented room. There they had planned of big robbery. Naveen, the resident of Prahlad garhi had helped them and Arush had seen the targeted shop for robbery. Naveen worked as waiter with Mahendra Pandey in Delhi and planing of robbery was decided before Dipawali. Later finally they were success in their planning on November 14 and they had robbery at Prem Shri Jewellers, Shyam Park Extension, Sahibabad.

Jewellery Worth ₹ 2 Crore Robbed From a Jewellers Shop in Sahibabad ; Ghaziabad