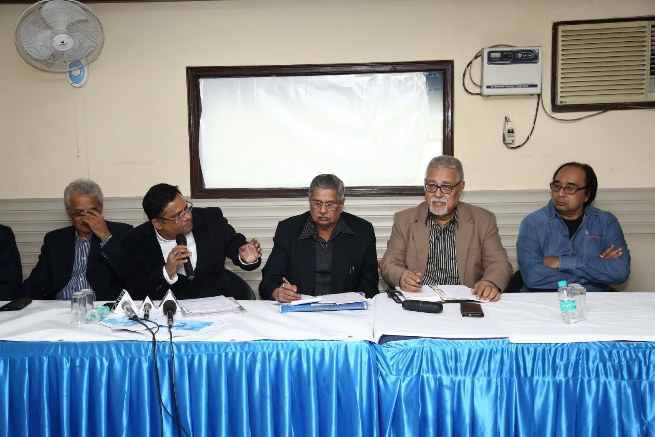 New Delhi, February 12, 2019; Film Federation of India proposes a formula for a reinforced PPP (Public Private Partnership) with GoI (Government of India) towards boosting footfalls in cinema houses, creating more jobs, realising the industry’s true potential as a contributor to the national economy and expanding its footprint and strengthening its presence in India and across the world.

The newly elected Executive Committee ofFilm Federation of India (FFI) met in Delhi today to take up some urgent burning issues that have been plaguing the Indian Film Industry for quite some time now, such as, greater industry representation in Government bodies, more screens, restoring and rejuvenating single screens, localised Animal Welfare Board offices, boosting film tourism and more…all on FFI radar; but first and foremost, reclassifying the Indian Film Industry!

It is only recently the Government has relaxed its stand and decided to lend a helping hand to the Industry in the form of a) partially relaxed GST on tickets b) intent to create a Single Window Clearance for the industry and c) willingness to working jointly with the industry to curb piracy.

“FFI has always been a pro-active organisation and hasworked together with the Government of the times since its inception,” says President Firdaus ul Hasan, “FFI is more than willing to constructively help support and complement the Indian government in its efforts to strengthen Indian cinema”.

FilmPiracy: One of the primary reasons for piracy is lack of easy access to the latest films.
India certified nearly 2000 films in 2017-18, barely600-700 films made their way to cinema halls and those that did had restricted access due to lack of shows and unrestricted ticket prices in states like Maharashtra.

We need to immediately arrest the closure of Single Screen theatres and making norms easier for converting urban single screens to multi-screen hubs.

We need tax holidays and rebates together with reduced custom duties and the like to enhancing footfalls with affordable ticket pricing.

Indo-Bangla Film Awards: “Indian movies are extremely popular in all our neighbouring countries. But in most of these countries there is no properbi-lateral agreement in place for import, distribution and exhibition of Indian films, hence pirated copies find their way to these markets. For example, in Bangladesh our movies are very popular yet they are not screened in theatres. We have to begin a process to change this,” Mr Hasan said. “As a part of this effort to address this an Indo-Bangla awards ceremony is being planned in October this year where actors, directors and producers from both the countries will be honoured for their contribution and a favourable atmosphere created for Indian movies”.

Global Cinema Festival: Strangely enough, good cinema is not easily available in India, too. Consequently, FFI plans to organise an international film festival in a city other than the big metros to promote movies and the region for tourism and investment from film fraternity for shooting purpose.

Animal Welfare Board: Another issue is that of the Animal Welfare Board.  While FFI understands the importance of the Board, its operation out of Haryana makes the process of seeking compliance entangled and lengthy considering that nearly 2000 films go for certification every year. Hence, FFI proposes that at least two members of the film fraternity be incorporated in the Board so that they can explain the process of using animals and also take into cognizance the care and difficulties. It further proposes that like the censor boards in each region, an Animal Welfare Board be opened along with it so that it can be gathered at one go along with CBFC certificates.