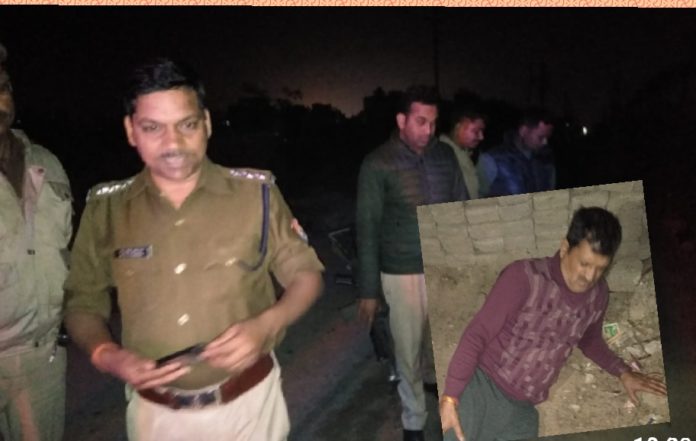 Ghaziabad: PS Sahibabad police today nabbed a hardened criminal against whom more than 30 cases of loot, murder and firing on police are registered in Delhi as well as in Ghaziabad. The Arrested person is also an liquor mafia.

The accused alleged to be hardened criminal namely Anoop Singh is a resident of Afzalpur under Sahibabad police station and was arrested after police engagement. He also received bullet injury on his leg during chasing by local police. He had a terror in the locality, where he used to sell illegal liquor.

The arrested accused is also a liquor mafia and had fired in air in broad daylight to intimidate people in Tulsi Niketan; a border area of Delhi-Ghaziabad. Ghaziabad police swung into action, since  when local residents had lodged a complained to the police against him for selling illegal liquor in the area. A bike and illegal arms have also been recovered from the arrested accused by the police, allegedly used in the crime.

While talking to A News Of India SP City Shlok Kumar informed, ” in past local residents had lodged complaint against liquor mafia and since then police was working on it. Early morning today police taken action after having certain inputs about the accused who is a hardened criminal Anoop Singh, a resident of  Afzalpur, Sahibabad Police station. He was arrested after police engagement. He received bullet injury on his leg in the process. He is having a criminal history of more than 30 cases in Delhi and Ghaziabad of loot, murder, firing on police etc. He is also a liquor mafia and had fired in air in broad daylight to intimidate people in Tulsi Niketan area, in last month. Local residents had lodged complained against him to police for selling illegal liquor in the area. A bike and illegal arms have been recovered from him.”